However, worldwide PC shipments are projected to total 367.8 million units for the full year 2010, 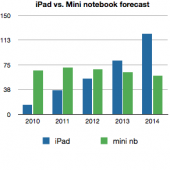 Speculation about the iPad production ramp indicates that the iPad will ship about 14 million units this year and 36 million next year. Projecting a forward growth rate of 50% and adding the Gartner forecast above gives us the graph on the left.

The iPad (plus competitors) will likely overtake the sales of mini notebooks as soon as 2012. The collapse in netbook sales is likely to be much more rapid than Gartner suggests.