With the number of active Nokia service users now reaching 140 million worldwide, the company today announced that more than 200,000 people are currently signing up daily to Ovi, and that Ovi Store has reached the milestone of 2.3 million downloads per day. Available in more than 190 countries,

Nokia updated its tally of download rates so we can put the numbers side-by-side with Apple’s iTunes. 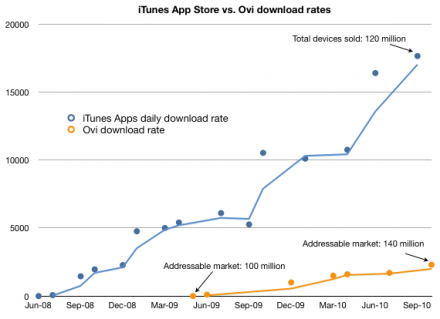 The slope of the Ovi curve does not yet compel one to get excited over the platform’s prospects in the near term. However to get a true picture, one needs to not only look at absolute download numbers but also the probability of any one user or device being used to download an app.

For this we need to note how the number of devices relates to the download rate. Apple announced recently that they sold 120 million devices running iOS. Not all those devices are still in use.  If we remove 20 million from that total we get approximately 100 million iOS devices. Nokia, on the other hand, specified exactly how many devices can access the Ovi store: 140 million.

That puts the weekly download rate per device at 1.24 for iOS users vs. 0.12 apps (or whatever is the appropriate content item for Ovi) every week for Symbian users.

As the table below details, the rate of downloads per device for iOS is more than 10x higher. This is the more interesting number if you are a developer.

If someone can point me to Android Market download rate (historic and/or current) I can add it to the mix.