The iPad was announced to a loud chorus of disapproval and disdain. It’s easy to forget the overwhelming scorn and insult poured on the product for months before and after sales start. Analyst forecasts were comical. At this time it looks like all 12 month iPad unit forecasts will have missed by more than 100% (mine included).

As data on iPad performance was published for the first quarter’s sales, the mood swung from ridicule to ridiculous.

Without regard to the growth of comparable products, analysts seem to have latched on to production figures which are notoriously inaccurate. The problem with production numbers is that they are only very loosely coupled with shipment numbers to customers. There are questions of work in progress inventory, finished inventory and the actual accuracy of reports. Production also follows a ramp and is not constant over time.

Another way to analyze a new product is to think about the distribution. Although late in the quarter some large distribution deals were made public, the channel did not have much time to be filled before the end of the quarter. Not only that but there is easily obtainable evidence that the iPad did not reach most international markets. Apple announced how they were rolling out a few countries every few months.

This trickle of international sales indicated to me that the iPad sales pump was not yet fully primed. My initial estimate was for in-line sales of 3.3 million which I aggressively increased to 5 based on some of the production numbers being mentioned.

This figure turned out to be 22% too high, but not as big an error as some of the other analysts.

Another way to look at it is through comparable products. The nearest comparable product to the iPad is actually the iPhone. It was a similarly “revolutionary and magical” product launched with a similar constraint on production and distribution. It was also built and marketed by the same people. They’ve been down this road before and have honed the process from the iPod through the iPhone over a decade.

If we look at the iPhone and compare it with the iPad, we see just how popular the iPad really is. It may not follow the same seasonal pattern as the iPhone, but it will probably ramp in a similar way. In the following chart I also show the iPhone Growth rate (right scale). 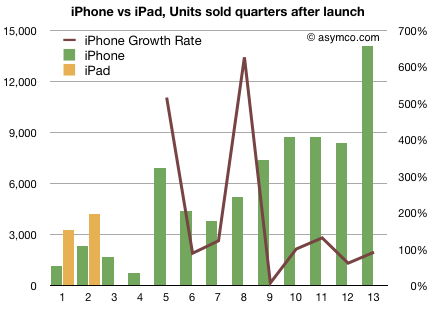 The iPhone has been able to maintain over 100% y/y growth on average. I don’t see a reason why the iPad can’t repeat this pattern over the next three years.