A complete market overview will follow when all the top tier vendors report the last quarter, but in the mean-time here are some data that are available: 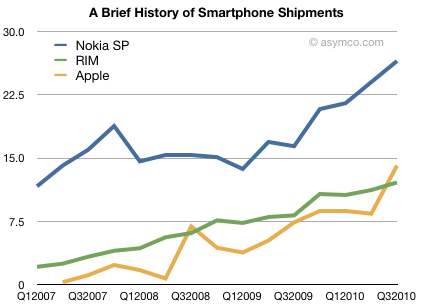 Whereas Nokia is often criticized for being weak in smartphones, the fact is that they have grown at a decent rate over the last two years. In fact, they’ve opened a gap with RIM. Apple has increased share but it will take quite a while to overtake Nokia.

So why is Nokia’s smartphone performance so under-valued? Partly it’s because ASPs have been dropping. A lower price and lower margin is sometimes seen as a sign of weakness. But Nokia has had a strategy of expanding into more price brackets in their core markets (i.e. outside the US). Half of Nokia’s smarpthones are sold through distributors not operators and probably end up being sold unlocked and unsubsidized. Price matters in those markets.

The other problem that Nokia takes a beating over is that their products don’t get used as smartphones. Many are sold without data plans at all which makes one wonder what exactly makes their phones “smart”. So many of these 100+ million/yr.  smartphones are really hired to do a feature phone job. They’re “overqualified” and thus underutilized. The statistics in terms of app downloads, browser and ad impressions all lag as a result. The ecosystem suffers.

Lastly, they are all but absent from the US. Due to accidents of history (CDMA) and various mistakes, Nokia never got a foothold in what turned out to be the most important mindshare market. A decade ago the US was a mobile data backwater, with lower data ARPU than Nigeria. It was not a market Nokia felt particularly deserving of investment. In hindsight, this was a big mistake.

But these knocks against Nokia still should not detract from the fact that they do sell a lot of Symbian phones. Distribution still matters as does having 600 operator customers. And in many parts of the world, Nokia is synonymous with mobile phone. Many of those buyers will migrate to future Symbian devices.

My mobile platform thesis has been that as long as penetration is not 80% and as long as operators are still in the value chain, mobile platforms will remain fragmented and split shares. The graph above shows exactly how that has evolved among the top three smartphone vendors.