I am dead serious. I am now convinced that we have enough data to determine for a fact that Apple will not only see a dramatic decline in quarter-on-quarter sales in units of the iPhone this January-March quarter (which is the predictable pattern and no surprise) but that we will also see a decline in iPhone market share against at least HTC and Blackberry;  that would be demoralizing news in itself. I know now that the numbers are clearly stacking up so, that the annual sales level of iPhone units, will result in a decline in iPhone annual market share in 2010.

via Communities Dominate Brands: iPhone in Memoriam: A History from its Peak Moment of Success. But who copied whom?.

Contrary to the loud and emphatic proclamations above, the data shows that the iPhone’s market share gains have been steady. 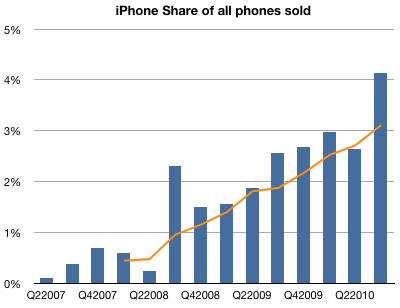