In the mobile phone industry, and indeed, in most technology sectors, price decline is a fact of life. Component prices tend to drop while their performance increases. This rapid obsolescence drives prices down constantly. Competition also plays a part as undifferentiated products are rapidly imitated.

This phenomenon has its own term: price erosion. It’s built into most business plans and forecasts.

But how real is it? What are the implications in terms of market share if one accelerates price erosion or reverses it?

This chart shows the average selling price for all the vendors whose data I maintain over a period of time. 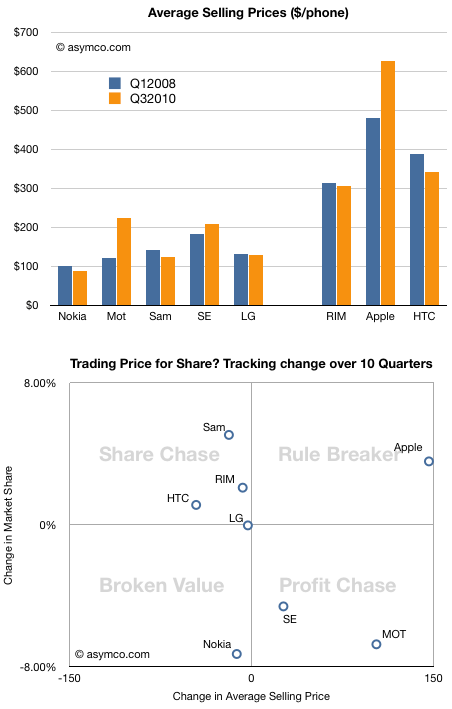 Normally, a drop in price is followed by an increase in share, and an increase in price by a drop in share. To test this hypothesis, I tacked on another chart that shows how share and price have been traded off in the market over the last ten quarters.

Note how prices have dropped for all but three vendors. Two of those vendors (Motorola and Sony Ericsson) have lost share. One, Apple, has gained share. The rest, whose prices did drop, had increases in share, very roughly in proportion to the price drops. Again, we have one exception, Nokia, which suffered both price and share loss.

Except for these two anomalies, the vendors are placed on the -45 degree diagonal that would show expected price elasticity in the market.

I took the liberty of breaking the chart into four quadrants, and gave them names suggesting the strategies of the companies.

Lying along the traditional trade-off axis are either Profit chasing or Share chasing strategies. Anomalies off the axis are either Rule Breakers or Broken Value propositions.

This view of the companies allows us to abstract and think about market evolution.

It would be interesting to think how these players will evolve over time.

It’s quite possible that LG will move into the profit chasing model (as they already indicated they would by building more smartphones). These strategies are typical of companies squeezed from the bottom and the top. I once called this group “the biggest losers” and suggested that they are the best target for Android.

It’s also possible that Nokia will move into the same quadrant, though their profit algorithm favors share above all else.

The biggest question is whether Apple’s rule breaking is sustainable. It’s not clear whether they are interested in share as that does not have all that much to do with their definition of “greatness”. But a platform strategy begs for volumes.

This remains the biggest puzzle facing observers of this market.