Morgan Stanley’s Web 2.0 update came out yesterday and it’s full of nice charts. Here is one: 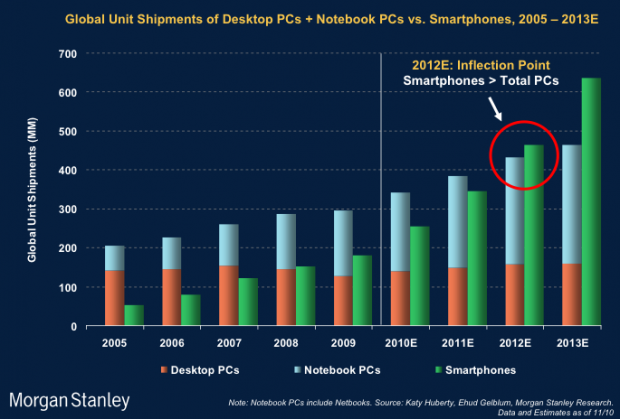 Note that the expectation for smartphones to overtake all PCs (including netbooks) will happen when smartphones sell more than 450 million units per year.

In 2013 nearly 650 million smartphones are forecast to be shipped.

My estimate for the iPhone in that year is 180 million. That would give iPhone (excluding iPad and iPod) about 28% share. The last quarterly figure is around 17%.

Perhaps 180 million iPhones per year will be defined as failure by those who consider over 80% share as a threshold for success but I still think it will be a healthy business.

Even assuming a cut in ASP to about $350, Apple will still be able to get about $62 billion in sales from phones (a bigger number than 2009 total sales for the whole company).

I would also add that by the end of 2013 Apple will have sold about 470 million iPhones. Though many will be out of use by then, the installed base will not be small (I’d guess about 300 million). Including all iOS devices, 500 million is a credible estimated audience for developers.

It’s entirely possible that Android variants, offshoots and forks will add up to a bigger number by then, but to pre-emptively declare the platform “war” won because the also-ran Apple will only have half a billion users seems disingenuous.