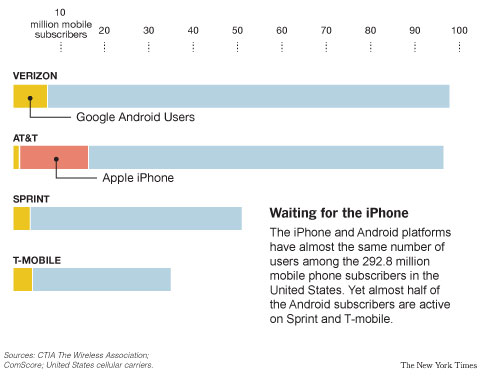 The chart also shows how the iPhone had a huge effect on smartphone adoption at AT&T and how it sucked the oxygen out of the segment for competitors.

It is possible that we’ll see more Android at AT&T and a lot more iPhone everywhere else, but on balance, the chart shows how exclusivity distorted the market.

It sounded like Tim Cook was really relieved to announce in the earnings conference call that:

We are not under a contractual exclusivity now in any country in the world. The last one was the United States. We have moved away from those.

What I’ve said before and we have seen this in every case, literally, that we’ve done, is where we’ve moved from an exclusive carrier arrangement to a dual- or multi-carrier arrangement, our growth has changed significantly and our market share has increased.