Chris Whitmore – Deutsche Bank:  And what is your experience then when you’ve gone non-exclusive from a subsidy and margin standpoint on the phone, have you had to give anything up in the past?

Tim Cook: We don’t give specific information out on the margins. But I think you can look at our ASPs and see that they’ve generally stayed above $600, and that’s despite opening up several markets from an exclusive market to a non-exclusive market.

Toni Sacconaghi – Bernstein Research:  You’ve said on previous earnings calls that the move to iPhone non-exclusivity in regions of the world has had no impact on your ASPs. Can you comment on whether that is it still the case today and whether we should expect any impact in the migration away from U.S. exclusivity?

Timothy Cook: I don’t envision the overall iPhone ASP decreasing from the December quarter that we just completed to the March quarter that we’re currently in.

But, as always, we can confirm and validate using the data on pricing we have available.

In this case in the financial reports (take iPhone revenue and divide by units sold): 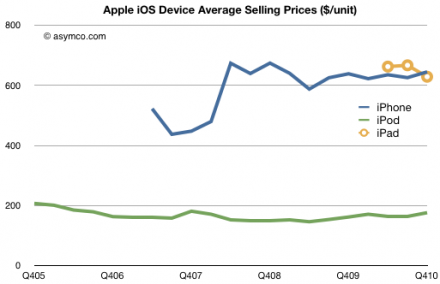 You can see that after the first iPhone “2G” which had a peculiar pricing that included revenue sharing with the operator and which showed up differently in the accounting, the iPhone has had a steady price slightly above $600 for over two years[1].

This is despite having more than 60% sales outside the US and being non-exclusive multi-operator in many countries. Despite being available locked, unlocked and everything in-between.

We can even confirm what one particular operator paid exactly. In October 2008 AT&T reported that they had paid $900 million for 2.4 million iPhones. That’s $375 per phone. Assuming a mix of $199 and $299 3G phones that gives something around $600–below the global ASP for that quarter of about $676. Here exclusivity would imply a discount to average price! The reason for the discount is most likely volume as AT&T was by far the largest buyer of iPhones globally.

Still unconvinced? Try shopping for an unlocked iPhone at any of various retail locations where it’s available unlocked. Accounting for VAT or other taxation, the price is always the same and is a slight mark-up to the operator ASP due to retail margins.

Judging from comments on this site, the myth that loss of exclusivity in the US will change profit margins for Apple still persists no matter how many times I repeat this story.