I’ve often said that the smartphone rising tide has lifted many boats. If you were selling smartphones during the last three years, your business was growing, no matter what phones you made.

In fact, measuring success and failure was a matter of deciding what growth rate was “not good enough”. Growing at 30% was nearly enough to shame some vendors into re-evaluating their strategies.

But that sort of tidal growth can’t last. At some point  ships with holes begin to sink no matter what the tide brings.

When we look at the data from the last quarter, we should be asking again whether some ships have developed some leaks. 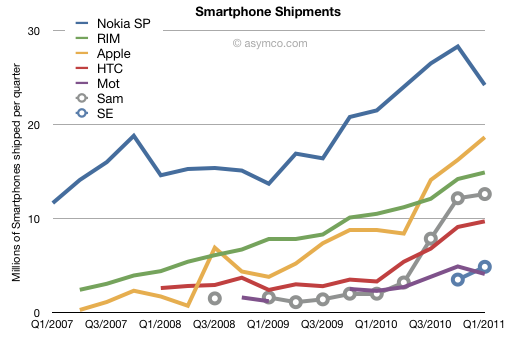 The challenge is in eliminating seasonal effects. Q1 is usually a sequential drop for many markets. There is an unsettling drop in Nokia and Motorola and a weakening in Samsung and HTC. On a year/year basis the growth rates appear more robust for HTC and Samsung (194% and 530% respectively), but one should note the low bases they started from. Apple maintained triple digit growth (113%) while RIM sustained a respectable 42%. Motorola grew at 78% but looks weak sequentially. Sony Ericsson began to offer smartphone units and they are showing a run rate similar to Motorola but can’t gauge their growth rate yet.

Apple and RIM seem largely unaffected by seasonality but Apple is growing twice as fast.

But the biggest surprise is the drop in Nokia’s volumes. There was a similar drop in Q1 2008 but the phone market was plunging into recession then and the company’s smartphones moved in sync to the overall market (one with limited competition). This quarter’s drop happened when the overall market is growing. The alarming thing is that Nokia’s smartphone performance in Europe seems to be a big part of the problem.

Data from IDC shows that Nokia’s volumes plunged by 15% y/y in Europe while the smartphone market there grew by 76%. Apple ended up with the largest share in a region that had been Nokia’s with 70%+ share. That share is now under 20%. Nokia’s overall growth was a mere 13% y/y while the market grew 73%. The result is the following picture of Smartphone shares: 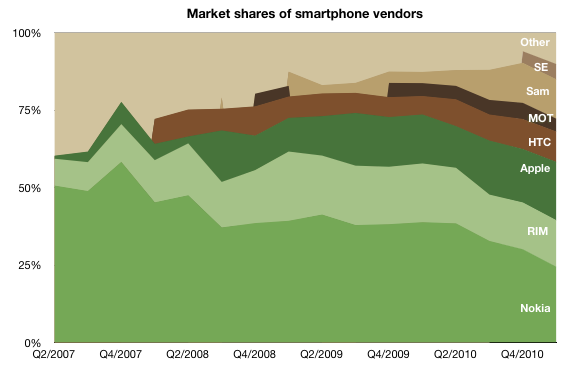 But perhaps the drop should not be a big surprise. Was it due to the public execution of Symbian? Did Europeans stay away from Nokia in droves due to an aging portfolio or because they felt betrayed. Perhaps we’ll never know but there is another indicator to mull over. Nokia’s brand fell to 81st spot in a recent survey. It used to rank in the top 10.