[Updated with new charts including data from StatCounter and not NetMarketshare]

Generally speaking there is an equivalence drawn between iOS and Android as technologies and even as user experiences. However, as I’ve pointed out on several occasions there is a very clear nonequivalence in business models and thus the “fuel” which keeps each platform running. But does this difference in models lead to some difference in the way the products are “hired” to do what they do. Does it imply anything about how the products are likely to evolve?

I collected into one place all the data I could find about utilization (how much of a service and how often it’s used) and possession (both in terms of current ownership and new acquisitions) of iOS and Android. 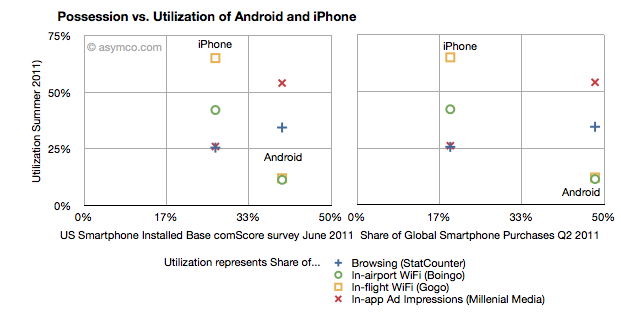 Possession data comes from comScore survey data of share of US installed base of smartphones by platform at the end of June 2011 (first chart) and share of Global Smartphone Purchases as of Q2 2011 sourced from company reports and IDC (second chart).

The charts are divided into nine sections corresponding roughly to “low”, “medium” and “high” utilization vs. possession.

What the data seems to suggest therefore is that for data services the iPhone is a far more popular tool than Android. But for in-app ad impressions and browsing the products are used in a similar manner.

The big difference is however that the services where iPhone utilization is high are those where users have to pay something. Most (if not all) of the ad impressions in apps are for free apps. So ad consumption scales with possession. But non-free services don’t. This data seems to support the hypothesis that Android users are disproportionately less willing to spend money (note that the data does not say that users don’t have money, but simply that they are not spending it). The other data which backs this hypothesis is that paid app sales on Android trail quite far behind the rate of purchase on iPhone. That could be due to payment problems in the Android marketplace but this data shows that there is some other effect as well.

Why is this important?

We can argue that Android is a low end product and that it disrupts and that this is consistent with that positioning. However it also indicates that the value is not in that ecosystem. And ecosystems are what sustain a platform in the long term. This debate will continue but I am reminded of other platforms which had similar patterns.

Both the Blackberry and Symbian had high possession (in terms of share) with very low utilization. There were lots of surveys which showed that browsing, app downloads and “monetization” of services after the sale of the handset were low. Much was written about it being due to poor experiences. But learned observers today insist that the experience on Android is as good as on the iPhone.

So why is there less economic participation from Android users? It’s not just about these proxy services, but all manner of activities which enrich an ecosystem. Possession without utilization implies a product that does not do its job. Its features are not being absorbed. Why would that be?