The Wall Street Journal reported that Sprint Nextel made a “multibillion-dollar” gamble on the iPhone. This is based on information that Sprint committed to buy 30.5 million iPhones over the next four years.

Wall Street Journal reporters calculated that the deal is worth around $20 billion on the basis of iPhone ASP during the last quarter (about $650). That Sprint would get that price is possible but not necessarily correct as there is likely to be some discount and the ASP Apple receives includes accessories.

But the “gamble” is more than the deal value. The way it’s being reported is that Sprint bet the company on being able to sell this many iPhones. So naturally we have to ask: how hard can it be to sell 31 million iPhones?

First, note that the order is over a four year period. It’s also not likely to be linear, with volumes accelerating over time. If I estimate a ramp where in year one the commitment is for 4 million, year two 6, year three 9 and year four 12 million we get a total of 31 million. Can Sprint sell this volume?

To get an idea we can look at the sales rates for the other US operators. I built a table of iPhone sales by Operator last July. The data is shown in the following chart: 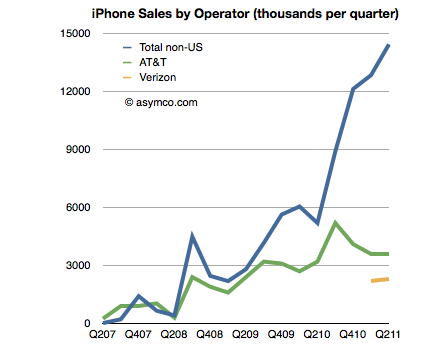 What is interesting is to see the number of iPhones sold in a given time frame as a percent of subscriber base. I chose to measure a year’s worth of iPhones where I extrapolated Verizon’s volumes from the six months reported so far. 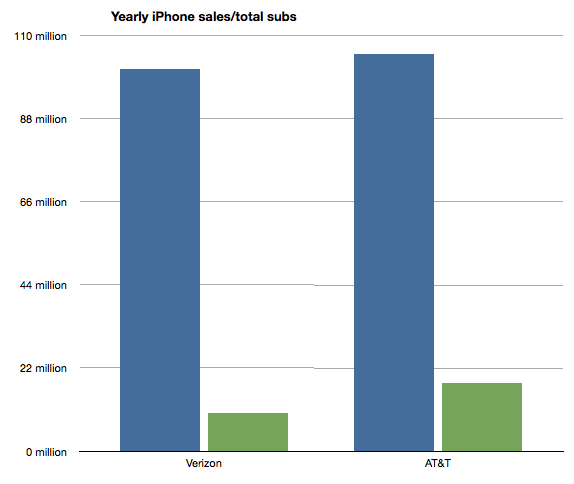 So if we assume that Sprint can sell iPhones at about the same rate as Verizon or AT&T (as a percent of their user base which was 51.1 million) we get about 7 million iPhones per year.

That’s right in the middle of the range it needs to get to 31 in four years [4,6,9,12]. I charted the projection on the following chart: 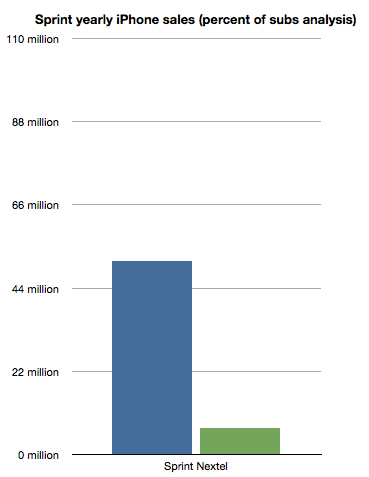 So the gamble Sprint is taking is that they will be able to sell iPhones at the same rate as Verizon and AT&T.

How is this risky?

The deal seems to be inline with what is known about the product’s popularity and the pattern of purchasing and upgrades that US consumers have been exhibiting for a few years.

As with AT&T and Verizon, volumes ramp up over time. As with AT&T, users are loyal and they upgrade regularly. As with Verizon, there is competition from Android and Blackberry. As with both, payment is expected up-front with payback over the duration of contract length. As with the others, there will be incentives to keep churn down.

If anything the riskiest thing for Sprint would have been not to do the deal at all. Indeed, we’ll get to see the effect of that option on T-Mobile.