Last quarter the iPad had unit growth of 166% with revenue growth of 146%. The iPad is selling more than twice the (also rapidly growing) Mac. The two product lines are shown below: 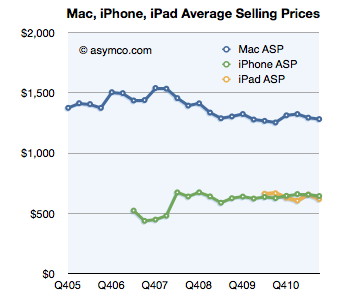 A big reason the Mac is still growing is that it now consists of 74% portables and the MacBook Air and Pro products are still largely unmatched and have a near monopoly in their target price.

But more importantly the iPad and the Mac both outgrew the PC market. Taken as OS X vs. Windows, the growth rates were 27.7% vs. 2.5%. If iOS is included along OS X, Apple grew its “computer” shipments at a rate of 99%.

The following chart illustrates the growth rates for Windows, Mac and Apple as a combined OS X/iOS. 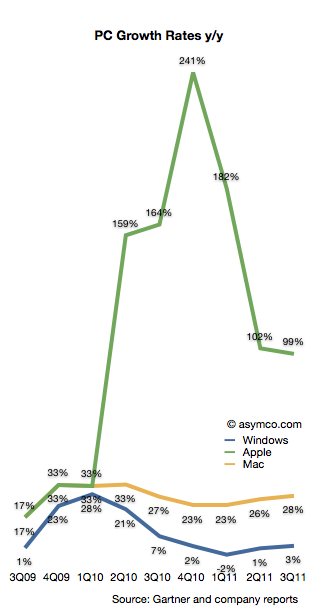 Even though Mac OS X grew faster than the overall PC market for 20+ quarters, its market share is still below 5%–lower than what the iPhone has been able to obtain in the far larger mobile phone market.

That share has grown from 3.2% in the same quarter of 2008 but it’s still a very slowly changing landscape.

However, if we include the iPad, Apple begins to not only grow very rapidly, it moves up sharply in terms of ranking among PC vendors.

Last quarter’s 16 million OS X and iOS tablets brought it into second place behind the 16.6 million PCs that HP sold. That was enough to give Apple 15% share vs. 15.7% for HP. Over the last three years Apple has gained nearly 12 points of percentage of share.

The other vendors mostly lost share but the most affected were the smaller OEMs. HP lost 2.6 points, Acer 3.9 and Dell 3.4. However “Other” lost 10.5 points. Lenovo is the only major vendor to gain share (+4.48 points).

What’s interesting about this pattern is that whereas in the phone business “others” is a rapidly growing group of companies, in PCs the smaller vendors seem to be suffering. They still make up about 30% of the market but that’s down from about 40% three years ago.

In contrast, “Other” went from 15% to 24% of the phone market in the same time frame. Part of the explanation is that the entry of the iPad took the wind out of the “low end” netbooks and other cheap PCs. Consumers migrated low-end usage to a product re-built around those jobs.

In the mobile phone market, the disruption is in the opposite direction: communication is moving rapidly up-market from real-time voice to latent messaging and from storage consumption to broadband consumption. The companies being rewarded today in the phone business are those who are leading the charge to new markets.