As the company did not report volumes or ASP last quarter either, the QoQ (Quarter on Quarter) growth estimates are almost useless. The only fragment that might be useful is the “High-20% YoY” given that they did publish units for Q3 2010: 71.4 million. This leaves the question of what “High-20%” means. Here are some ranges and what the result would be:

As the company also provides revenue for its mobile division (14.42 trillion Won) we can therefore estimate the average selling price: $142. Is this a slight increase? By a similar approach, last quarter’s ASP was $139, and assuming exchange rates did not vary widely, this increase is small enough to be called “slight”.

We also have a figure for the operating margin for the entire Telecom group (16.9%) which gives an operating profit of $2.2 billion.

The last piece of the puzzle is the number of smartphones Samsung shipped. Samsung said smartphones grew “more than 300%” year over year. That would imply 31.4 million. One estimate is from Strategy Analytics that suggests 27.8 but it’s coupled to an overall volume estimate of 88 million (well below the 91.4 million estimated above). The Wall Street Journal published an estimate of 28 million.

I have no idea how to narrow down this estimate, but if we go with the one that claims the highest precision (27.8 million) we get an estimate of about 30.4% of Samsung’s volumes being smartphones (what I call the “smartphone mix”). That is an interesting basis for comparing Samsung’s smartphone business to other companies’ smartphones. I prepared a graph showing how pricing is affected by the increasing mix of smartphones in vendor portfolios. 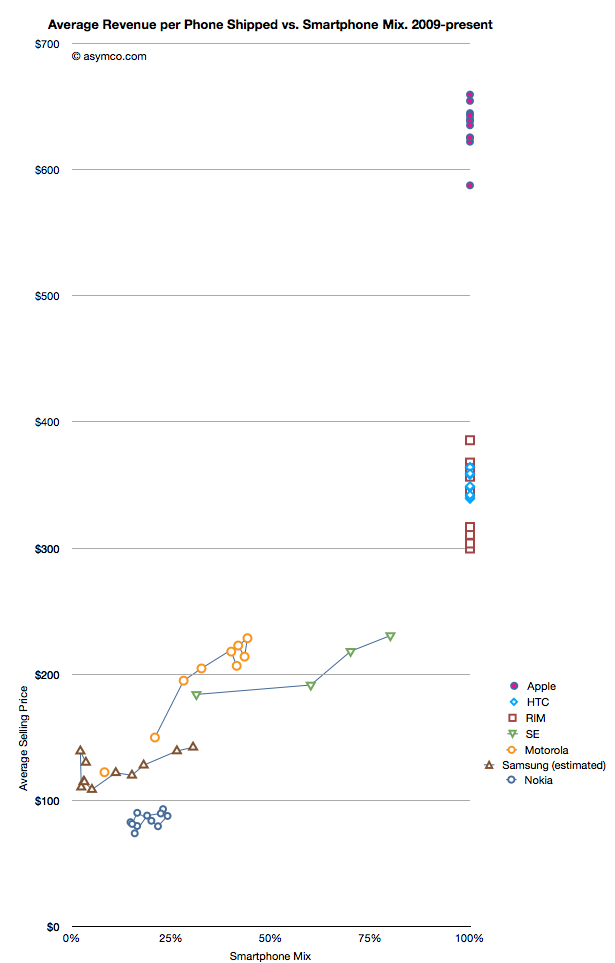 What the graph shows is the movement of prices as companies have increased their smartphone mix since Q1 2009. For example Sony Ericsson moved from 31% smartphones to 80% smartphones in about a year. Their ASP increased from $184 to $231. Some companies have not changed their mix. Apple, HTC and RIM have maintained 100% smartphones in their portfolios so their pricing has been consistently high ($650, $354 and $357 over last 12 months, respectively). Conversely, Nokia has struggled with its smartphone portfolio and as a result its pricing has remained stubbornly clustered below $100. 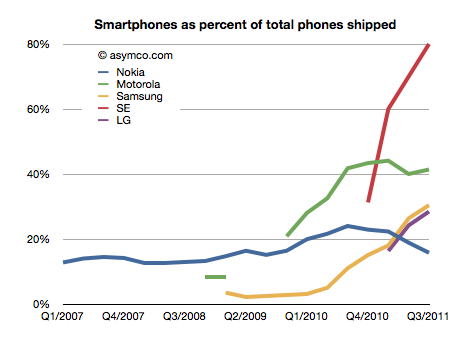 But the most interesting companies to watch are Samsung, Sony Ericsson and Motorola. You can see how their “vectors” or price migration point toward the sweet spot where HTC and RIM reside. Ideally, they would be very much better off with pricing in the $300 range.

Samsung is moving quite rapidly toward the sweet spot but the slope is not as steep as the others. That’s may be because SE and Motorola have much smaller volumes but it’s still an open question why, with an estimated 30% mix of smartphones, the pricing remains $60 lower than when Motorola was at the same mix or $40 lower than Se.

Some of the answer might be due to the number of “low end” smartphones (Bada?) that Samsung is selling or maybe their non-smartphone pricing is trending down a lot more rapidly.

Keep in mind that if we change the assumption of the number of smartphones to a lower number (i.e. below 27 million) then the trajectory of the Samsung line in the graph would increase and may match more closely the slope of the other two vendors.

It would follow then that switching to a 100% smartphone mix would make a lot of sense.