The iPad and Mac businesses both grew well in the last quarter. Tim Cook said they are observing some cannibalization of Mac from the iPad but much more switching to iPad is coming from the Windows PC market.

The evidence is still hard to pin down directly but the fact that PC sales (excluding the Mac) are down gives credence to the claim. Mac growth, in contrast, is largely unaffected. The following chart shows the the iPad volumes vis-a-vis Mac volumes and the Mac growth through recent history. 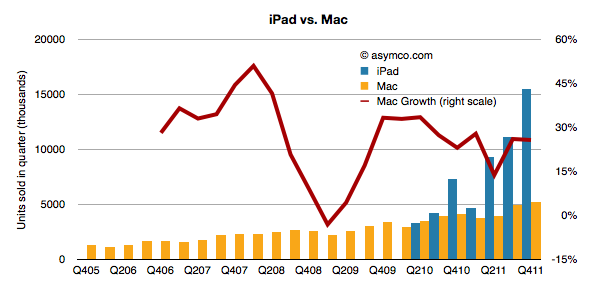 The iPad has out-sold the Mac since inception and is now about three times the volume. However, the growth rate in the Mac has not changed much.

The impact on the PC market has been discussed recently and the data in the following chart is an update given more precision on the units from Apple: 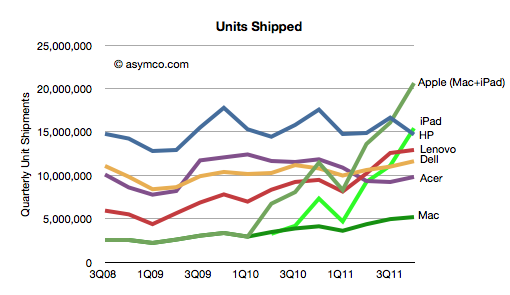 The new data shows that the iPad alone would be the largest PC vendor and Apple with iPad and Mac combined is selling 5 million more units (or 30%) than the top PC vendor.

The impact of the iPad is not specific to any single vendor (Apple included). It competes for time and purchase decisions across all computing alternatives and though many times it’s additive, it is also substitutive and will become increasingly so.

Tim Cook mentioned on the earnings conference call that Apple sees the iPad as addressing a market larger that the PC market:

I truly believe, and many others in the company believe, that there will come a day that the tablet market in units is larger than the PC market. In fact, it’s interesting to note that in the U.S., it’s clear from the IDC’s recent data on desktop PCs in the U.S., that tablets exceeded desktop PC sales last quarter in the U.S.