In January I noted that there were more iPads sold by Apple than PCs from HP, the largest PC vendor in the fourth quarter. Including all tablets, this is the distribution of market shares by units shipped. 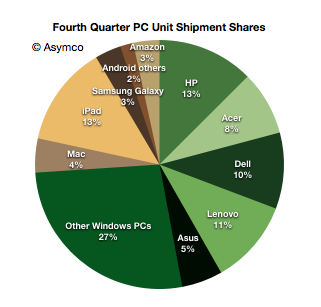 Note the different color palettes for Windows and non-Windows.

By the metric of tablets+PC’s Apple appears to be the leading vendor. However, if we consider only the Mac, Apple is still well behind. The historic unit volumes of the two is shown below: 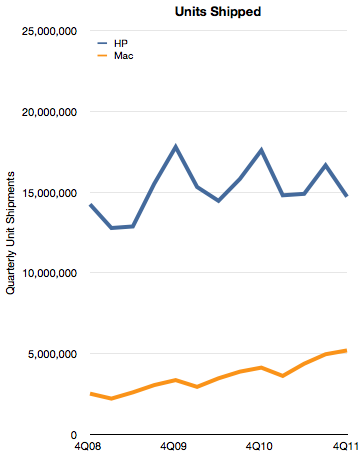 Although Apple has nearly doubled its shipment volumes since 2008, it’s still only one third that of HP. In addition to comparing volumes, we can also measure profitability. In this case HP’s PSG (Personal Systems Group) reports operating profits and we can estimate the same from Apple based on a gross margin estimate and an operating expense estimate (as percent of sales). 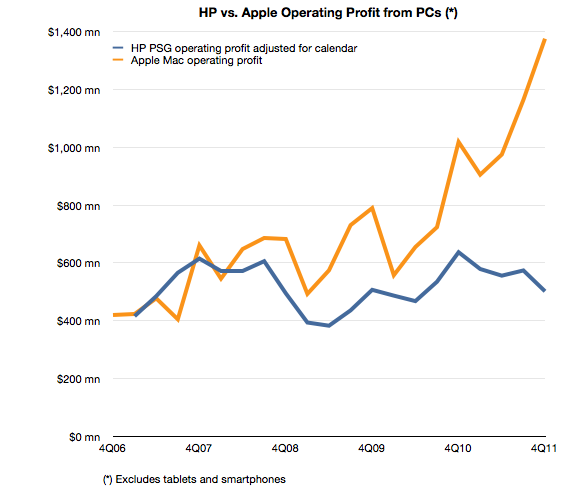 The operating profit for Apple is 2.7 times higher from a third the units. This gap is a result of a vast difference in profitability. HP’s operating margin for PCs is 5% while Apple’s is 21%.

A few days ago I highlighted that Apple’s iPhone yields disproportionate profits because of the way it performs the jobs its hired to do by consumers and operators.

With the Mac the story is that Apple’s OS X is primarily responsible for delivering quadruple hardware margins vis-a-vis the most successful PC vendor.

Both iPhones and Macs are sold as hardware products and the entire econometric analysis of Apple depends on hardware cost structures. This is because hardware lends itself to easy measurement. However, a casual observer would be stumped by a comparison with competitors which cannot come near the profitability Apple enjoys. How can the same bundle of components (admittedly mostly off-the-shelf) be sold at triple the margins?

It comes down to software. Apple has a monopoly on iOS and OS X and charges for it through its hardware. That’s a very valuable monopoly. It’s worth at least $1 billion per quarter.