We’ve been very, very focused on China. China, we’ve had incredible success with iPhone. Over the past few years, we’ve gone from a few hundred million dollars of revenue in greater China, to last year $13 billion. So we really’ve been focused on trying to understand the market there and then taking those learnings to other markets. As it turns out–and not very many people agree with me on this, probably–but what I see is that there’s a lot of commonality in what people around the world want.

One of the most important constraints on the purchase of iPhones is the state of 3G (or, more broadly, mobile broadband) networks. An iPhone is a mobile computer whose primary value is derived from high bandwidth data communication. Because this bandwidth is not universally available, the iPhone faces a restricted addressable market.

The good news is that 3G networks are being adopted very quickly. The International Telecommunications Union reports that 20% of mobile users have “active subscriptions to mobile broadband” (1.2 billion out of 6 billion). That’s encouraging but the subscription rate varies widely by country. Ideally we should look at the data on a country-by-country basis.

To start, I took a look at two countries which may form an interesting sample: the US and China. The following chart shows the subscriber structure in the two countries grouped by 2G/3G subscription and by operator. 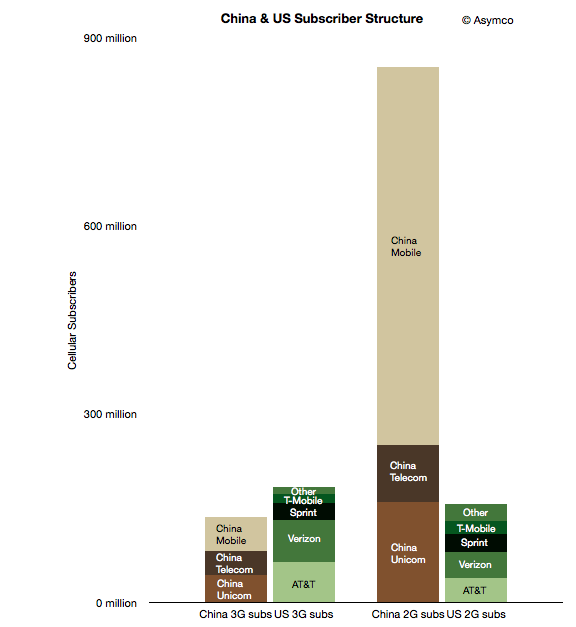 although China is a far bigger market, the lower 3G penetration means that the theoretically “addressable” market for the iPhone is smaller in China than in the US (136 million vs. 183 million respectively).

However, there are further restrictions. Apple does not have distribution agreements with many (most?) of the world’s operators. In these particular countries, China Mobile, T-Mobile and “Other” US operators do not distribute the iPhone. We should subtract those operator customer bases out of the addressable market. But those conditions are variable: operators may sign up for future versions of the phone and 3G subscription rates are increasing. That means we can segment the market as follows:

This segmentation leads to the following diagram.

I also added the current users given comScore data for the US (29 million) and an estimate of 8 million Chinese users. Here are some observations:

The question that comes next is what is a reasonable limit to total penetration? What can we reasonably expect or what could Apple reasonably target?

I’ve been using a global share of 20% as a reasonable target to test growth assumptions. Assuming no significant growth in user bases, 20% share in the long term (>5 years) yields a total of about 258 million users. That’s equivalent to a 7x increase. Put another way, a 5x increase yields a market share of 14%.