January saw a return to trend line growth in US smartphone add rates. The 767k/week rate is within the band after November’s below- and December’s above-the-line outliers. The weekly add rates are shown (with projection of trend) below:

The pattern shows a likely 1 million new smartphone users per week being added consistently by the fourth quarter of this year. 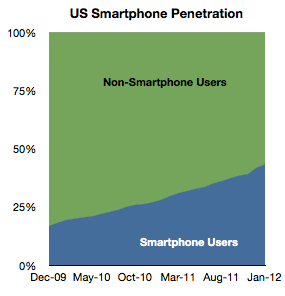 Overall, penetration of the sampled population (above age of 13, primary phone and excluding business purchases in the US) reached 43.3% in January. The increase was 1.45 points from December.

A significant 35 million US users  switched to smartphones in the last 12 months, equivalent to 15% of the user population. My current forecast is that 50% of the user base would be smartphone users by June 28th. 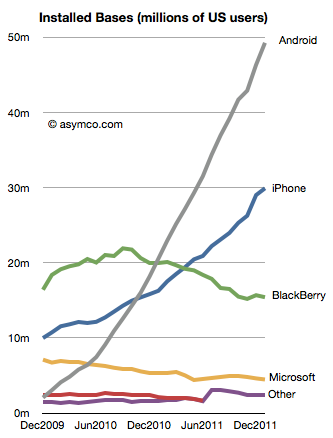 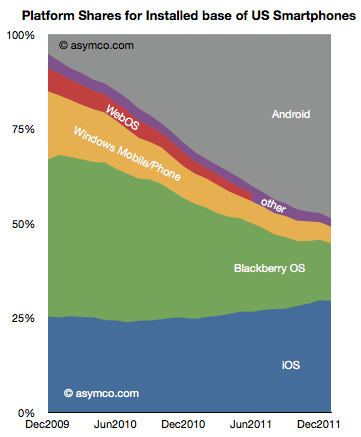 The net gains for each platform by month are shown in the following diagram: 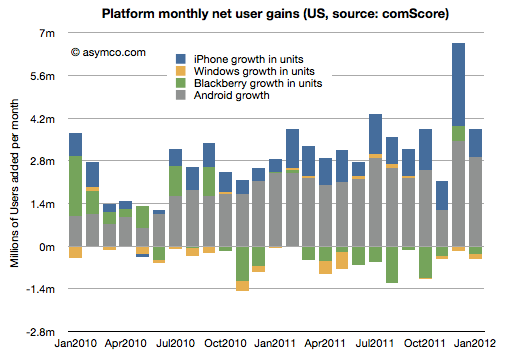 The two trends that continue are that overall penetration is nearing saturation and that two platforms seem to be increasing their share of that base. The “comeback story” for any of the hopefuls will depend either on switching users away from their current platforms of trying to engage with late adopters. The first option is daunting due to latent network effects related to platforms and the second sounds to be symmetric to existing incumbent strategies.

Without an asymmetric approach, the challengers are unlikely to succeed.