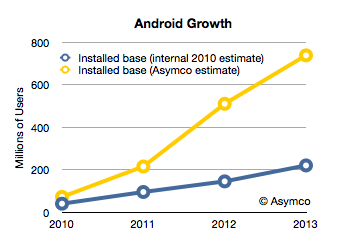 I added the blue line which represents what Google had as an internal estimate in mid-2010.[1] The difference between the two lines shows that Android’s growth is far higher than what the company expected.  If the company itself did not expect this growth, it’s unlikely anybody else did either.

Unexpected, exponential user growth is usually accompanied by a dramatic positive improvement in the finances of a company and a higher return to shareholders. The curious aspect of Android’s success is that it has not had an impact on either. The market has not “discounted” the half-billion anticipated Android users into a price for Google shares that reflects this growth. It can only imply that those users are not very valuable.

But why would there be such a disconnect between the number of users and their value?

In order to answer this question we have to come to grips with what I call “Android economics”. We need to understand how Google uses Android to make money and whether it is succeeding and if it’s not, why not.

In many ways, the Android business model is straight forward. It’s an extension of the existing Google business model: Revenue is obtained from Search, AdSense and the applications that enable these two.  In the case of Android there is also revenue from app sales (Google Play a.k.a. Android Market) and from AdMob. Of course, all these revenue sources (except for Play) are sold through other mobile channels that include alternative, competing platforms. They are present on iOS, Symbian, BlackBerry and even embedded OS phones ranged directly by carriers. For each of these alternatives, Google pays for placement of their search as the default search in the browser.

To Google, total search revenue from iOS is far higher than it is from Android. That’s because iOS users engage more with their devices and there are not yet a large multiple of installed Android users vs. iOS users.

But it would make sense that having your own platform would be more economical because there would be none of these placement fees. In this sense Android is another “channel” for distribution of Search and AdSense. But one which may be a lot cheaper.

However, it turns out that it does not work that way. Android has other costs.

In fact, Android’s distribution costs might be higher than other channels. What we have to understand is that all of Google’s channel revenues have a “cost”. The revenue from a particular distributor of search results that Google generates is offset by the cost to acquire the terms. You can think of it as Google paying for the queries through a revenue sharing agreement. Google does not get search terms directly and depends on distribution. Overall, it pays about 50% of revenues back to distributors. In the case of its own web sites the rate might be lower, perhaps 40%.

Google even has a term for it: Traffic Acquisition Costs or TAC.

Google does not make a secret of it: network carriers and device vendors (OEMs) receive revenue share. From the latest earnings conference call:

Yes. I mean, again, I’m not going to talk about specific of the TAC on mobile. But as you know, we get people using our devices both organically as well as through our distribution partnerships with carriers and OEMs. And typically, the OEMs and carriers participate in some of the economics that are on the Android marketplace or Google Play and some of them participate in the economics around Google Search just the way we would do syndication on the Web platform, which you do with many partners around the world. We have similar deals on the mobile front.

Arora made another point in the quote above. Not only is there revenue sharing with carriers and OEMs for Search and AdSearch but also for Google Play (app and content sales.)

This basic observation leads to a series of questions:

I’ll be answering these questions in a series of posts this week.