Apple has been releasing data about payments to developers with increasing frequency. Last week’s $5 billion announcement was the fifth such update and came after about one quarter since the last.

Knowing the payments to developers and the cumulative download count allows us to get a very accurate revenue point for each download. As the frequency increases we can observe growth and seasonality patterns.

The following chart shows how average revenue per app download and the average payment rate to developers has changed since the iTunes app store opened and given the data points available: 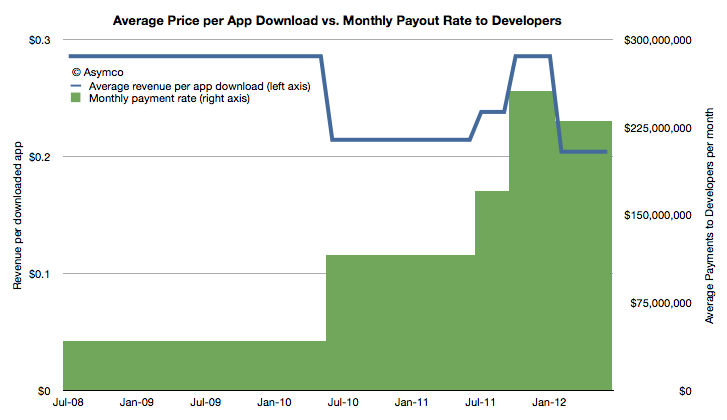 The green area in the chart should add up to $5 billion. The average revenue for all downloads is 24c.

Although there has been a drop in the revenue and payout rate in the last six months, the cause may be due to seasonal effects. We have not been able to see data that might show seasonality in prior years so we can’t be sure it exists. However, it makes sense to me that new buyers are likely to engage in a burst of app buying and there are more iPhone purchases in the second half of the year than in the first.

In any case, the current “run rate” of payments to developers is about $7.5 million per day or $230 million per month. Both are up from last year.

Whether revenues are decreasing or not will require some more data. The last period’s 20c is not far below the app store lifetime pricing of 24c.