Apple announced that the total number of iTunes account (with credit cards attached) has reached 400 million. This was touted as being the largest collection of credit card accounts for any retailer and I have no reason to doubt it. However, looking beyond the bragging rights, there are more interesting patterns to observe about this asset. 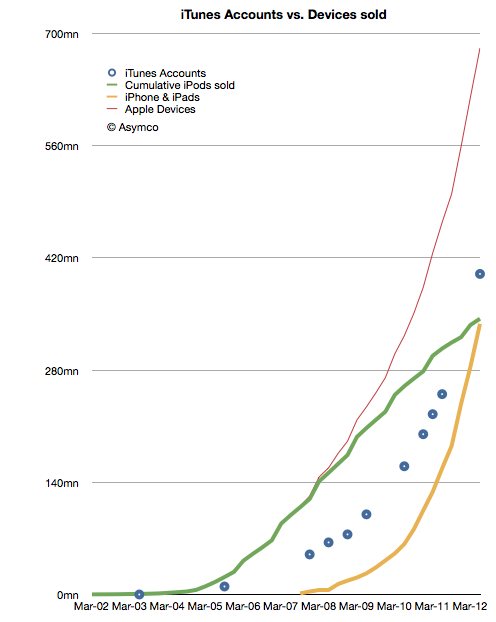 The first observation is that the combined total iPhones + iPads have overtaken cumulative total iPods. The iPhone started in Mid ’07, more than five years after the first iPod shipped. The acceleration in that product line is still evident while the iPod decelerates gracefully.

The second observation is that the total device count has reached 680 million in the last decade. It’s a big number but it is still a number that is dwarfed by the overall device market. Apple is still around 10% of the devices market today. It should give an idea of how many devices could still be sold in the next decade.

The third observation is the ratio between the iTunes accounts and the total devices sold. Since iPods, iPhone and iPads have been dependent on iTunes, the number of iTunes accounts gives a rough indication of active users. Combining active users with total devices sold should give a rough estimate of the number of retired devices. In other words, if we assume that account holders typically use one device then by taking the difference between devices sold to date and accounts at that point in time we should know how many devices have been retired.

Dividing that number of retired devices by devices in use should give us the retirement rate and that is shown in the following chart: 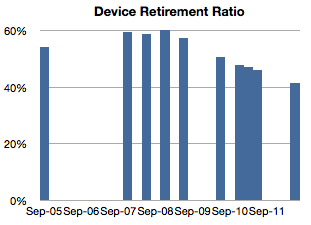 Note that as the iPod was slowing and the iPhone was still a small part of the total, the retirement ratio was increasing. As the iPhone accelerated, the ratio began decreasing and is still decreasing.

Projecting the retirement rate should give us a way of more precisely estimating  the addressable market for developers, accessories makers, and other ecosystem participants.  Currently that means that about 60% of all Apple’s devices sold are still in use. We can tune that figure upward in the next few quarters and make better estimates as Apple releases their shipment data.

The iTunes account data is not just a way to calibrate addressable markets but also a valuable method for measuring device longevity. The distance between the red line and the blue happens to be nearly a constant 8 quarters as shown in the following chart (note change to log scale for the vertical axis). 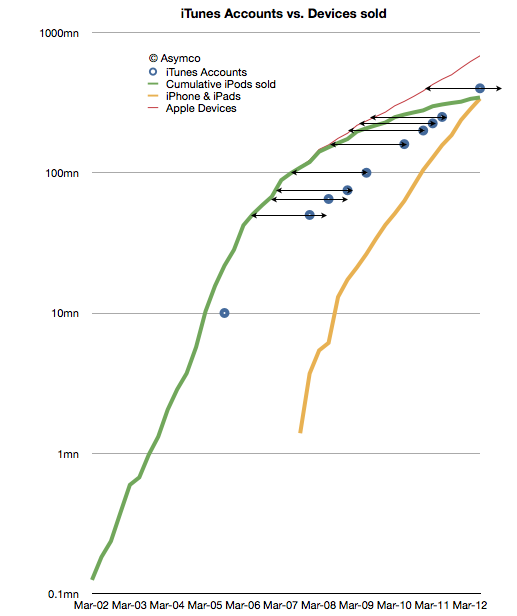