In the five years since the iPhone launched, Apple created a total of 35,852 retail jobs. 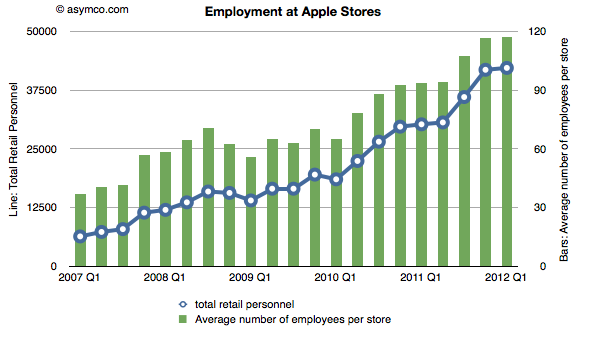 Which brings up an obvious question:  Why did Apple triple employment at each store? One could answer that many of the newer stores are bigger, so-called flagship stores. But the vast majority of stores are in mall locations which are of limited size. Flagship stores alone cannot account for the increase. One could also suggest that perhaps the stores are open longer and there is a need for more shifts. Again, the vast majority of stores are constrained by the opening hours of malls which, as far as I know, have been steady. Anecdotally, it’s also evident that there are more employees in a store at a given time. There are many more of those colored T-shirts at first glance.

One hint is in the design changes in the stores. Apple has removed shelving, registers and almost all non-Apple merchandise. It has replaced the visible stock with tables on which rest products that can be used. If there weren’t any people in the store, the store would look almost completely empty, just an open space.

But that’s the whole point. The stores are designed to be filled with people. The stores have an open layout because it allows more people to be inside the store at the same time. And the more people the more employees.

We have the data to prove this: The visitors per store per quarter increased from 125k in Q1 2007 to 235.5k last quarter. Nearly double the number of visitors in five years. It’s this increased traffic that is closest tied to the increase in employment. This is illustrated by the following chart: 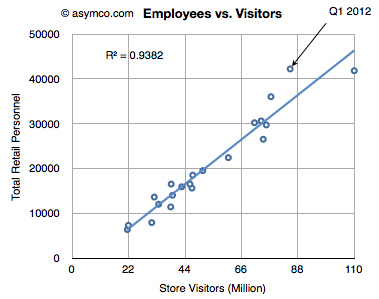 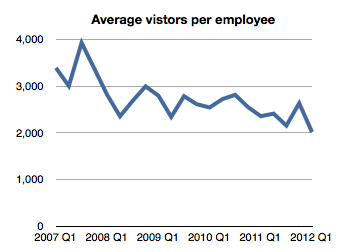 [If we consider the time an employee spends working we can even guess that the average visit was served by about 14 minutes of employee interaction–this is up from 9 minutes five years ago.]

If we assume this relationship as causal, then it might be that the stores are “tuned” to ensure a reasonable if not pleasurable experience for the visitor. In other words, the proxy for a “quality” experience is the assistance of an Apple retail employee.

Taking this a step further, we can perhaps hypothesize that Apple is treating its retail stores as hired to provide a human touch to its products–not just as a service but as a way to listen and help in the most basic way. Steve Jobs once said that Apple no longer had to be present at trade shows because they have millions of conversations with their customers every day through their stores. These conversations happen with the retail staff.

Through their Apple retail staff, Apple might even be said to be putting a face on their brand. You can see it in the advertising.

The corollary to this would be that the job of the store is not primarily to sell things. This is confirmed by the fact that store employees are not on commission and there is no sales pressure on visitors. Indeed, the sheer number of employees in a store of modest size (117 employees on an average of about 8k sq. ft.) implies a brazen disregard for the economic orthodoxy of retail efficiency and incentives to sell.

And yet the stores are astonishingly efficient at selling things. The statistics are off the charts in terms of sales per square foot and overall profitability. Even though this employee time has a cost, revenues and profits have all risen in unison.[1] 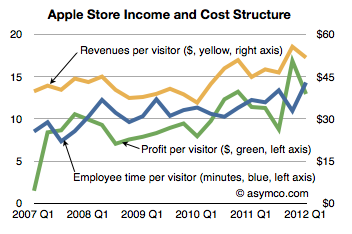 Of course, the products have a lot to do with this performance. Apple stores sell desirable, popular products which are premium priced. But taking these desired products and coupling them with a “human touch” job to be done strengthens the brand as well as expands its volume of sales. It may be that Apple’s retail approach could not work with a brand that was less desired. I.e. regardless of a large head count, a Sony store may not see the return on retail investment that Apple gets. Conversely, by not putting a face on Apple’s brand the products may not sell quite as briskly. Ron Johnson said on the launch of the iPad that the stores were almost designed for it. Discovery and hands-on time create demand.

It’s as if Apple retail has an inter-dependence with Apple, the brand. One cannot live without the other.

This is, as far as I know, a unique relationship for a technology company. If anything, most technology companies have sought the exact opposite: to put others’ faces in front of customers–to break the messy process of sales and support down into pieces to be outsourced to “value adding” resellers.

A pity then that this humanizing touch takes such a long time to build.