The history of these expenditures is shown below (the blue bars are statements from 10K reports including the one above shown as the right-most bar): 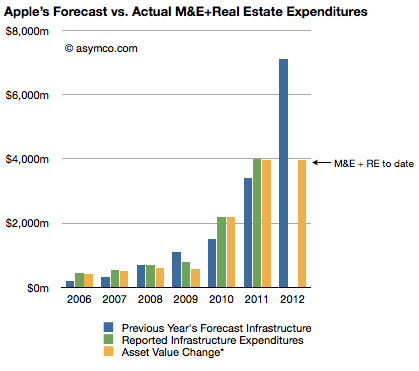 Three 10Q reports so far this fiscal year have given us updates on asset values and the change in these values are shown as the right-most yellow bar. The asset value change suggests $3.9 billion has been spent so far of the $7.1 billion budgeted. Thus we can estimate that about $3.2 billion remains to be spent in the fourth fiscal quarter (thus bringing the yellow bar to parity with the blue bar in the chart above–a parity that was achieved or exceeded for five out of the last six years).

Assuming $200 million of the fourth fiscal quarter budget will be for land and buildings[1] results in an estimated $3 billion remaining for product tooling and manufacturing process equipment and data centers.

The history of spending for various cost centers is shown below.[2] 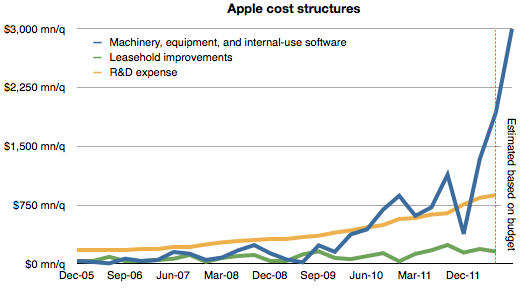 Note again the forecast for the fourth quarter based on budget given last October. Also shown below is the spending on machinery and equipment by quarter for the fiscal years 2011 and 2012 including the estimate for FQ4 2012. (Blue bars represent 2011 quarters and green represent 2012.) 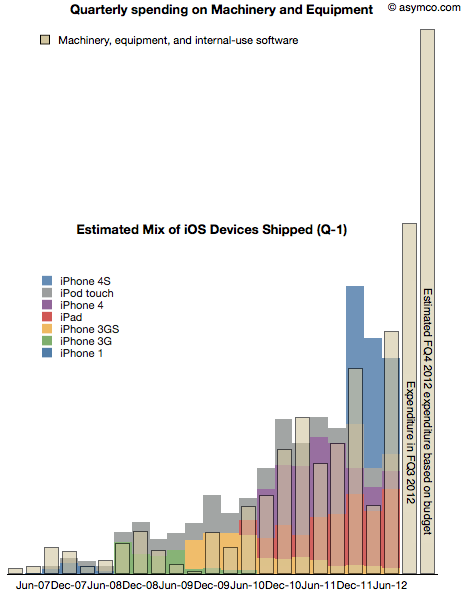 Note that due to the time-shifting the Expenditure for FQ3 does not have a corresponding output–expected in FQ4–and that FQ4 expenditure is estimated based on budget.

With this data in place, we can now begin to answer the question of what are the total iOS device shipments expected in the current (ending September)  and the following (ending December) quarters.

Our eyes are pretty good at seeing patterns in data so perhaps it would suffice to know the scale to the graph above and thus fill in the colored output bars to match the spending. But to make it a bit more precise, I drew the following chart: 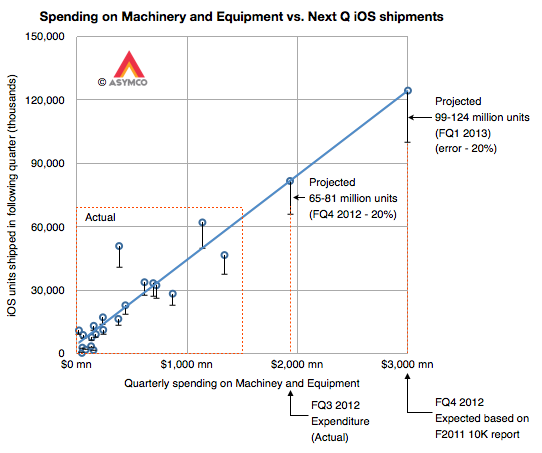 It shows the same data but as an X-Y scatter plot where the X axis is quarterly spending and the Y axis is iOS unit shipments. Note that the actual data points are in the lower left area delineated with a dashed red rectangle.

I drew the blue line corresponding to an assumed linear relationship between the two variables to project the iOS output based on additional expenditures for FQ3 and FQ4.

I used error bars of -20% to show a possible conservative range.[3]

This yields an iOS output of approximately between 65 and 80 million units in the current quarter and 100 to 125 million in the fourth calendar quarter. The sum of the low ends of this estimate is 165 million units.

Stay tuned for a padcast report with more details on this approach.