Phil Schiller stated (under oath) that when assessing sales for a new model of the iPhone, Apple used an easy shorthand:

That’s a helpful gauge. Did it hold and will it continue to hold?

In order to test this rule of thumb we need to know generational sales. Although we know overall unit sales for a given quarter, since Apple has been selling several versions simultaneously, we need to make some guesses about the ratio of generations in the mix. My guess is about 10% for 3G vs. 90% 3GS and 5% 3GS vs. 10% 4 vs. 85% 4S. That results in the following pattern: 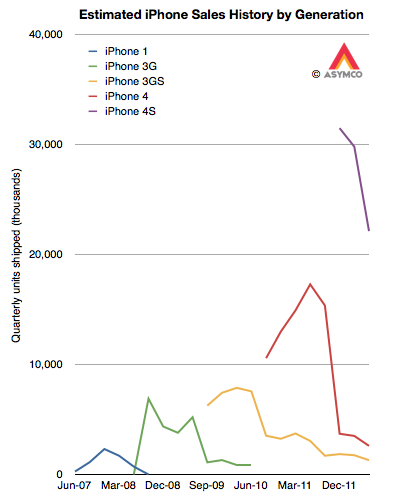 The cumulative totals for these generations can then be generated and they appear as follows: 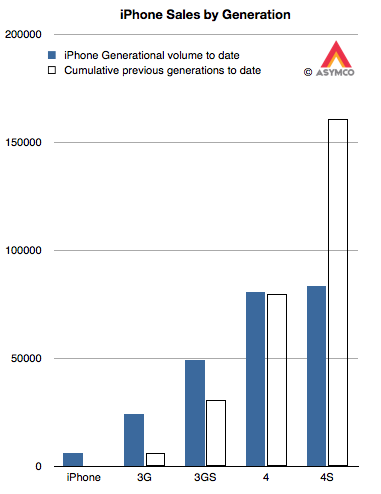 This leaves us with the question of how many iPhone “5”s will sell. As it stands today, the cumulative total would have to be greater than 263 million units (including assumptions for the current quarter.) That target is shown below: 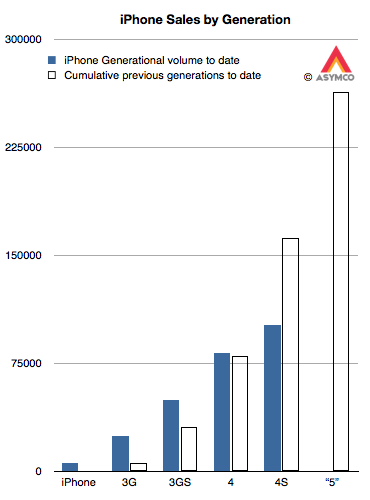 Is that a reasonable target?

Unfortunately, this is a moving target. As the 4S (and maybe 4) remain in production, the target continues to increase with time. However, we can still take a stab at this.

Recall the analysis of production based on budgeted CapEx spending. It resulted in a best guess of about 165 million iOS units sold in the following two quarters. I further forecast iPhones in isolation to be about 102 million over the same period. Taking that forecast forward and assuming a 60% growth rate,  I currently have about 200 million iPhones over the next twelve months. If 85% of those are the next generation, that yields about 170 million iPhone “5”s through mid 2013.

This is well short of a target of 265 million. But that’s only over the next four quarters. If the iPhone “5” remains in production for at least as long as the 3GS then it might cross 200 million. There is also the question of whether the “mix” will begin to favor the older generations more. If that’s the case, we might see version “5” meet its target.

Underlying all this is the question of a change in strategy toward more penetration (vs. current skimming.)  That might allow for sustaining the 100% historic growth rate. If so then Apple will easily sell 250 million iPhone “5”s.