The US has reached 50% smartphone penetration.

comScore data shows July penetration at 48.8% and a monthly growth in penetration of nearly 2 percentage points. Given the rate of growth, it’s nearly certain that we’ve crossed 50% in August.

The historic growth is shown below: 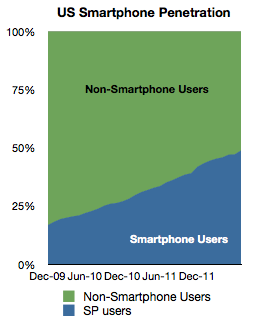 The platforms making up the smartphone market in the US have seen unequal shares of this new population of users. The following diagrams show how the install bases have changed in absolute and share terms. 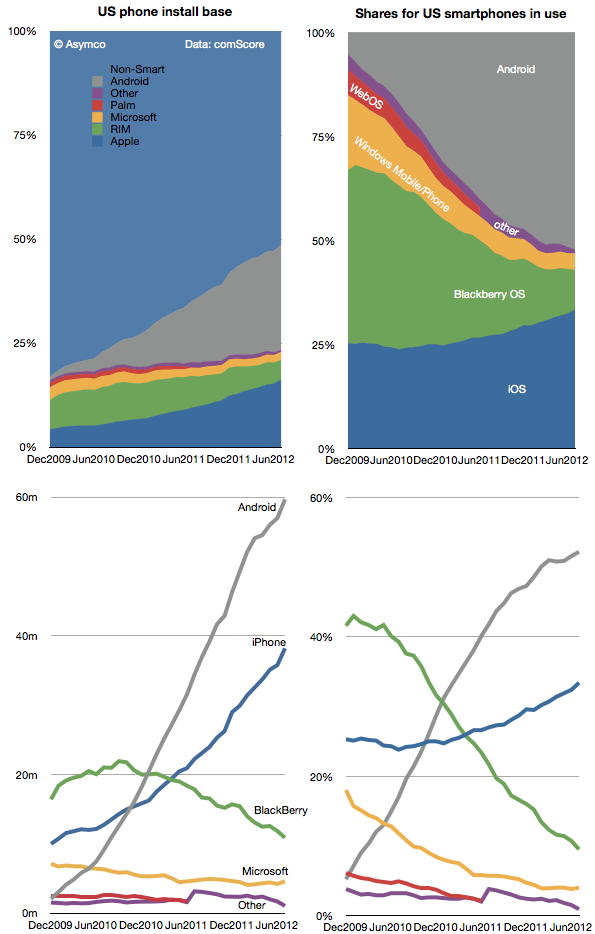 To round out the analysis, here is the net user gains for the platforms showing the net addition or loss of users since early 2010. 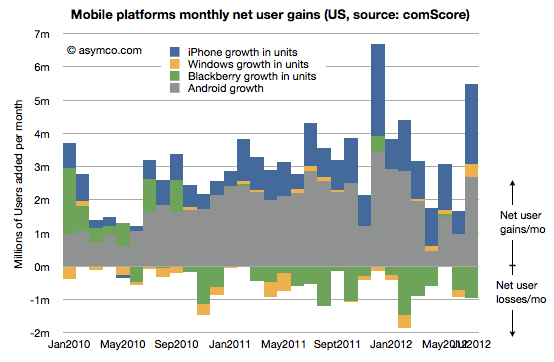 What I look for in this data are signs of slowing adoption (so far there aren’t many), subtle shifts in platform performance (as seen in RIM’s move from consistent net gains to consistent net losses) and signs of churn or the transfer of users from one platform to another (rather than from non-consumers to consumers.)

The story in the latest data seems to be that Windows Phone has turned in a first significant gain in users (378k new users). Its share seems to have stabilized at around 4%. This is in contrast to BlackBerry whose hemorrhage continues (a net of 7 million users defected from the platform in the last 12 months.)

On this occasion of reaching what I’ve called the tipping point, it’s worth reflecting on just how far we’ve come. In December 2009 the total number of smartphone users in the US was 39 million whereas now it’s about 115 million. That’s a total of 75 million new users in a bit more than two and a half years, quite a story there.

And yet, half of the phone users still remain to be converted. It’s possible that the growth in adoption will remain steady but it’s also possible that it might slow down and follow the “S-curve” adoption rate that new consumer products typically follow, perhaps reaching saturation at some point below 100%.

The changing character of competition will need to be reflected in product strategies. Non-consumption is typically an easier competitor to beat with features. Switching users from a comparable product is harder and may require pricing pressure. To solve this in a time of transition, new products will have to split into a set offered to new users and another set offered to switch users.

You can see the pressure of this on the Windows Phone platform most of all. As a late comer, does the Lumia range from Nokia fit the bill as targeting non-consumers or switchers?

So it’s quite difficult to see where Lumia fits in the US. There is no obvious opening. The next 75 million first time US smartphone users may be attractive to Microsoft and Nokia but it’s not clear why, having waited so long, those buyers will be persuaded by the new brand. Perhaps subsidies will help. As indicated with the first US Lumia launch, the product was priced at a discount to the prevailing price point for a premium smartphone. Perhaps that’s the “good enough at a good price” strategy.

If so, it has not been a home run. Perhaps there is still time for this strategy to play out in 2013 but what if Lumia is not actually being marketed this way?

At launch Nokia has tried to promote the brand as something “better”. Better camera, better charging, better maps, better screen, etc. They have promoted on Twitter with the #switchtolumia hashtag. Microsoft has had the “Smoked by Windows Phone” campaign targeting specifically existing smartphones.

I don’t want to suggest that one positioning is more appropriate or more likely to succeed than another. That’s a tough call. Either could be the right choice. What I would suggest however is that there needs to be clarity of thought and communication on the matter.

Perhaps the launch of the new Lumias (920, 820) is part of a clear positioning toward the high end. But the absence of pricing and distribution and how the operators will be engaged leaves the question open. The strongest criticism of the effort so far is this lack of clarity about how the product is intended to be perceived by the buyer.