The Price/Earnings ratio is a very simple measure of the “value” a company has. The Price is the current share price and the Earnings is usually the sum of the last 12 months’ earnings per share. In other words it measures how many of the last year’s earnings are built into the share price. Put yet another way it’s the answer to the question “If earnings don’t change, how many years will I have to wait before I’m paid back for my share purchase with retained earnings.”

So a company with a P/E of 10 implies that if nothing changes, in 10 years a share owner would “earn” back the price they paid for the share. Any earnings after 10 years would be “profit” for the share owner. You can imagine it even more simply as buying not shares but an actual small business of your own. You pay up front for it and then wait until it pays you back. After getting paid back for the initial purchase you then make money that you can set aside.

So with a company growing at 20% the “realized P/E” is 5. You realized the price of $100 in five years’ worth of earnings. In the scenario above you paid expecting to wait 10 years but you got paid in five. If that’s your retirement plan then you can retire five years early. Not bad.

Let’s then look at what Apple gave investors as “realized P/E.”

If you add these values up you realize that Apple reached your price about two thirds of the way into 2011. So the company earned your purchase price in 5.7 years. That becomes the realized P/E if you bought in early 2006. The following diagram shows the time period as a box encompassing the earnings (and cash) for a share purchase in early 2006.

Investing in Apple between 2006 to 2010 meant obtaining a payback period of less than 4.5 years, on average. In other words, regardless of what the trailing or forward P/Es getting quoted at the time (trailing is illustrated below), buyers actually paid for only about 4.5 years of earnings. In other words they actually bought Apple for a P/E of about 4.5.

Using our small business analogy, buying Apple in the past few years has meant getting paid back in less than five years. That makes it a very low risk opportunity. 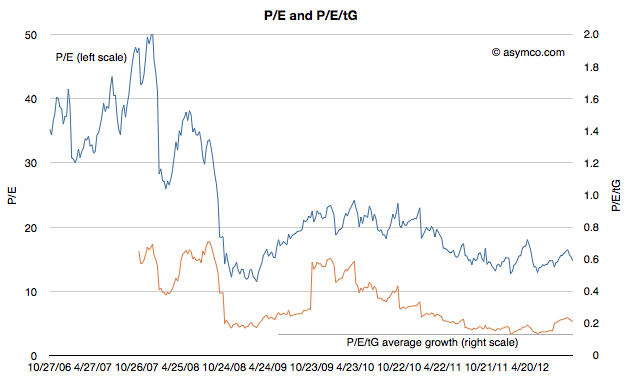 I could try to repeat the process for years 2010 onward but it would require making forecasts beyond 2013, something I leave as an exercise to the reader.