For Q4 we sold 1.3 million. That is up over a 100% year-on-year. We sold more than 5 million Apple TVs during the fiscal year, which is almost double the previous year, when we sold 2.8 million. So the business continues to do very well, but if you look at the size of revenue of this business versus our other businesses, it’s quite small and so it still has the hobby label, however it’s a beloved hobby and we continue to focus on it and continue to believe there is something more there and continue to pull the string to see where it takes us.

Five million Apple TVs per year is a half-billion dollar hobby. As such it quintupled from the first year (calendar 2007). 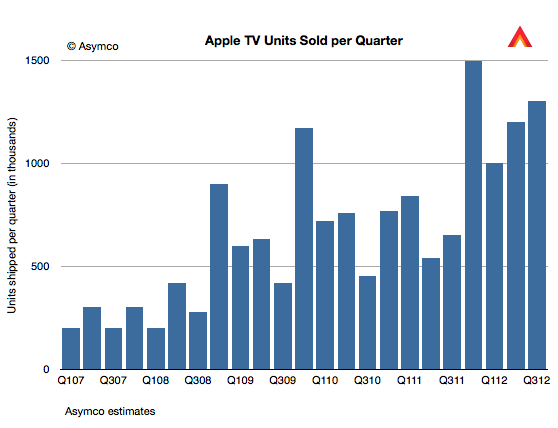 The value for hardware is, of course, only a part of the story. It is accounted for as part of peripherals revenue and amounts to 18% of total peripherals revenues. Last May I estimated that the installed base of Apple TVs was 10 million. I’d estimate current total to be closer to 12 million. Assuming $10/month in content sales per Apple TV results in $1.4 billion of which 30% might be retained by Apple as revenue (agency fee).

The yearly revenue thus could be as high as $900 million. Therefore it seems plausible that Apple TV is on the verge of being a billion dollar business.

It may be a hobby to Apple but I’ve noted before on my podcast that Apple TV is a mirror image of the Kindle business model: Sell hardware at low margins and experiment with content sales as a profit model. The “hobby” moniker means that it’s not a big business but how big is Kindle or Nexus 7 for their respective owners?

Kindle may sell up to 10 million units at nearly break-even but is the average revenue per user much higher than Apple TV? What about the Nexus franchise? Is the loss on hardware leading to revenue to Google+OEMs above $10/month? I doubt it.

I can’t be precise or absolute about it since we don’t have data from Amazon or Google about units or from any of the platforms’ margins or attach rates for content, but I’m doubtful that they qualify for more than hobby status according to Apple’s definition. At least in terms of profitability, Apple TV could be bigger than either Kindle or Nexus tablets.