Nokia announced 4.4 million Lumia smartphones were shipped in Q4. That’s about 14 million since the Lumia line was launched a year earlier. It isn’t however nearly enough to replace the lost sales from Symbian. One year earlier Nokia shipped 19 million Symbian phones in the fourth quarter and the year before 28.3 million. The history of smartphone sales from Nokia is shown below: 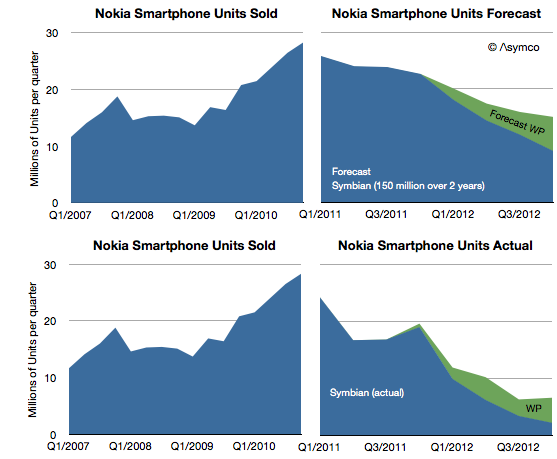 I repeated the forecast I drew up in February 2011 when the platform switch was announced. That forecast was based on the company stating that 150 million Symbian phones would still be shipped. Symbian fell far more rapidly than I (and Nokia) expected and to date only 98 million have shipped. The last quarter’s 2.2 million seems to be so low that it will be hard to imagine the platform lasting more than a few quarters.

My forecast for Windows Phone was 15 million (through Q4/2012) and the 14 million actually shipped is not far off. However, note that the sequential growth into the fourth quarter was lower than the same period last year. For the holiday quarter Nokia received almost no boost. If there is reason to be optimistic it’s that there wasn’t a decline in overall smartphones into Q4.

The overall result is that Nokia remains in an operating loss status and it’s going to be very hard to recover. No phone vendor has successfully recovered to date. The company managed to book a €50 million one-time payment for IP rights (presumably from RIM) and is sustained by royalties and platform support payments from Microsoft. But even so it’s barely breaking even.

The prospects for Windows Phone may be improving however. Operators in the US continue to talk about it. We don’t have a split for AT&T’s push this past quarter and estimates suggest that 80% of smartphone from AT&T were still iPhones but Verizon will also push the platform and there are suggestions it’s doing well in Germany. HTC has also launched some WP flagship phones and may have had a good December as a result.

That translates into steady progress. But the growth of Android and iOS continue as well. Windows Phone needs to continue to persevere in adverse conditions for years to come. The Finns know a thing or two about that.