One of the most startling announcements during the WWDC 2013 was iOS in the car. The mockup that was shown seems to indicate the use of the car’s in-dash display as an “external monitor” for an iOS device while control would come from inputs using Siri.

The technical details were not released so it’s hard to know the protocol used to accommodate this interface. However it seems that it will be generic enough that a number of launch brands signed up for the launch. The list includes Honda, Mercedes-Benz, Nissan, Ferrari, Chevy, Infiniti, Kia, Hyundai, Volvo, Acura, Opel and Jaguar.

Is this a significant opportunity?

Before we get excited, it’s important to note that this will likely take a very long time. It won’t even begin until 2014 and the number of new models may trickle into showrooms quite slowly. Consider that the time it took for automakers to universally support external audio input (mostly the trivial line-in) was about a decade.

To also curb our enthusiasm we need to realize that the car industry does not produce many units. In 2012 there were over 60 million cars produced (with the following regional mix:) 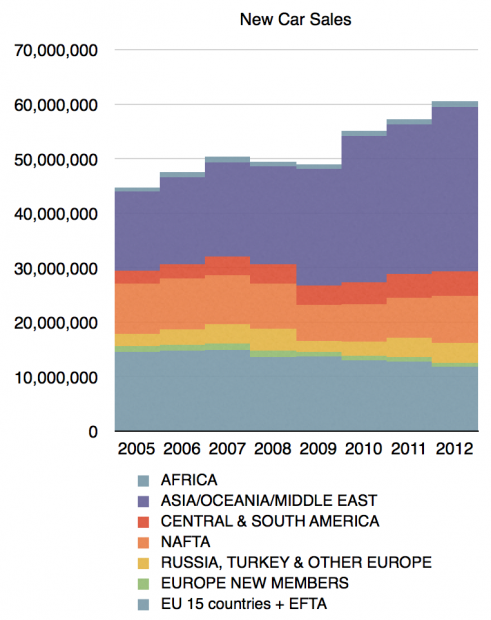 In contrast, 60 million is about the number of phones sold every two weeks. In 2013 there will be more iPads sold than cars.

In particular the companies mentioned had the following production figures in 2011:

Including the parent companies and all vehicle types they produce, the total is about 30 million units, or about half of the world-wide production. Obviously, not many of the cars produced will have iOS in the car capability.

Therefore the total unit opportunity is not very significant, perhaps less than 10 million a year. Is there a per-unit cost that compensates for this?

This is harder to answer. The way Apple has been licensing accessory makers is through the MFi (Made for i) program. There used to be a flat 10% fee off of the retail price of the accessory sold. However, there may have been changes. The licensing fees are not public and it’s quite possible that the price is a flat amount per unit and that it’s a negotiable. It’s hard to know what terms are being negotiated with automakers but my bet is that it’s not likely to be a significant source of revenue per unit.

So the total revenue from licensing the “Made for iPhone” trademark to automakers won’t be significant.

But it is significant for the car industry. The significance is that cars have finally risen to the role of being phone accessories. They have acquired the ability to participate in a computing ecosystem. During all these decades when the world has embraced the information society and intelligence has been embedded in the fabric of life, automakers have resolutely avoided being a part of it. Automotive information, connectivity and user experiences have remained in a Galapagos Syndrome-like isolation from reality. The reasons are rooted in the crisis of rigidity that plagues the industry, something I’ve touched on briefly in The Critical Path podcasts (e.g. Asymcar).

So this is a hopeful development. If.

If it actually moves at a slightly-faster-than-glacial speed.

If sufficient cars get display systems (billions are produced for the pockets of  young and old, poor and rich; but cars have to be considered “luxury” to be graced with an LCD)

If standards are adhered to.

If all brands (which operate individually as autonomous divisions irrespective of group-level strategy) accept the notion.

If these and many other conditions are met, it would allow, finally, the migration of autos to the status of information appliances and, eventually, to being hired for jobs that are currently left undone.