One of the curiosities of the mobile phone market is how vast it is but also how heterogeneous it has always been. I wrote about this in 2010:  Smartphone parochialism: How operator policies prevent or promote platform adoption. This observation was influenced by my time at Nokia where I became amazed at how differently users behaved in different countries.

There were many causes. Some cultural, some historical, some economic and some policy-driven. The result was that it presented a challenge to any company with global ambitions and indeed it was rare to see the same company do well in every market. Japanese companies did well in Japan, European companies did well in Europe and US (and Korean) companies did well in the US. Nokia was most successful because it was able to apply an European model more broadly (but not in the US). Samsung succeeded by simply adapting to each and every market with hundreds of products. But it was a particularly “provincial” market.

My assumption was that when smartphones would become the majority of phones in use there would be a normalization of behavior and thus a homogeneity of preferences. This is, after all, what happened in other platform games. PC form factors are globally consistent, PC operating systems are equally preferred around the world, FaceBook, Google and Twitter are also, unless censored, uniformly popular. Apple’s iPod eventually also became a global phenomenon with no material difference in preference by market. Likewise for game consoles.1

However, a decade after the broad adoption of smartphones, the relative popularity of various platforms is still unevenly distributed. Prior to the iPhone, Symbian was strong everywhere but the US and BlackBerry was very strong in the US but weak elsewhere. Windows Mobile had footholds in some markets but little traction in others. Today the picture has changed but it’s still a patchwork of preferences. Consider the following graphs. 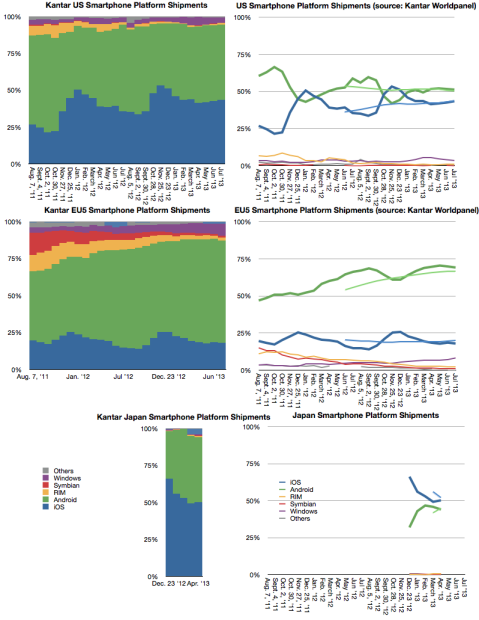 They are the most detailed sets of data on platform phone purchases but they not the only data: We also know that Android is vastly more popular in India from web usage statistics. We know that BlackBerry is sensationally popular in Latin America and the Middle East. We know that within Europe there is a gap between North and South in iOS vs. Android and even more pronounced between East and West. We know that whereas iPhone was a huge hit in Korea upon its launch there, Samsung and LG swamped it in the last two years.

But the data shown above is the story of iOS being very popular in Japan and increasing its share in the US while being flat in EU5. Again these three markets are different but each contradicts the global picture.

Note the differences in trend not just absolute performance. This is what is puzzling. There seems to be a divergence between markets: Markets are become more islands onto themselves rather than one whole. This contradicts all the theories of how computing markets should behave (network effects, ecosystems, monopoly power, etc.) It implies that there is still a great deal of friction in the market; friction which I suspect to be due to the peculiar nature of telecom economics.

I wonder if this observation is, as usual, late on my part and that Apple’s iPhone product marketing has seen it years ago.