The pattern may be that companies either have short post-trauma lives of about two to three years or relatively long post-trauma lives lasting 4 to 5 years. What determines this life expectancy and how long do RIM, Nokia and LG have?

These comments came right after BlackBerry (then RIM) announced a loss and thus entered what I called the “post-traumatic” phase of its existence.1 The observation I have been making is that once a company begins to generate negative operating margins from phone sales, that phone business never recovers.

The question then becomes one of gauging how long they have before the business is sold, dissolved or merged. Since that update, both Nokia and RIM have tentatively agreed to be sold. If the sales go through then we can update the graphs as follows: 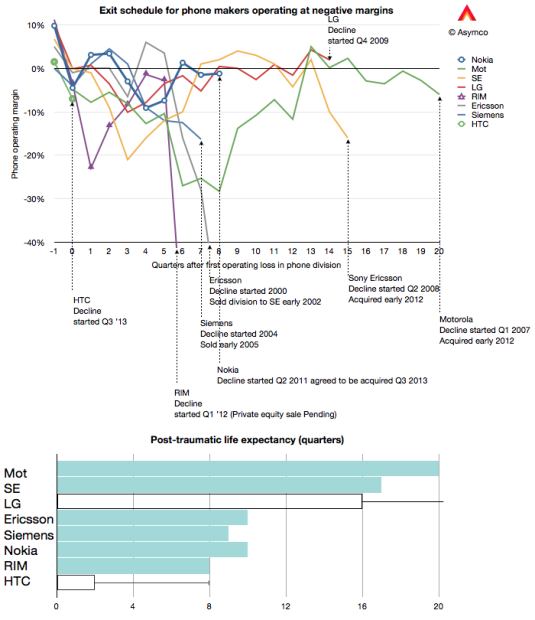 It turns out that Nokia and RIM did indeed have “two to three years” of life left under the same ownership. Two years to be precise. But as Nokia and RIM change hands (and are thus re-classified in the graph above) HTC enters the schedule.2

HTC has just confirmed that they have lost profitability for the first time since going public in 2002. As the clock begins running the alarm is now set to a much tighter 2 years. The implication being that HTC will change ownership or control no later than mid 2015.

But there is a post-script to this story. LG, you may note, has not exited phones. In fact, it seems to be recovering nicely. Doesn’t that give hope to HTC?

I don’t believe it should. The caveat to this short post-tramuatic life expectancy hypothesis is that it applies mostly to companies which derive the bulk of their sales from phones. Companies which are conglomerates or which can offset losses from phones with cash flows from other businesses tend to live longer.

This does not mean however that LG’s survival is assured. The factors at work in the phone business place continuing stress on the weakened while favoring the strong only temporarily. The dynamics are nothing like those in consumer electronics or in the computer industries. Reversals of fortunes are breathtaking.