In the post Seeing What’s Next, I showed how the rate of change of adoption of technology varies with time and asked what might be experienced by present and future generations.

It turns out that knowing how what innovations become universal and the speed at which these technologies are replaced can give us an idea of what individuals might experience in their lifetimes.

Here’s how to think about it: 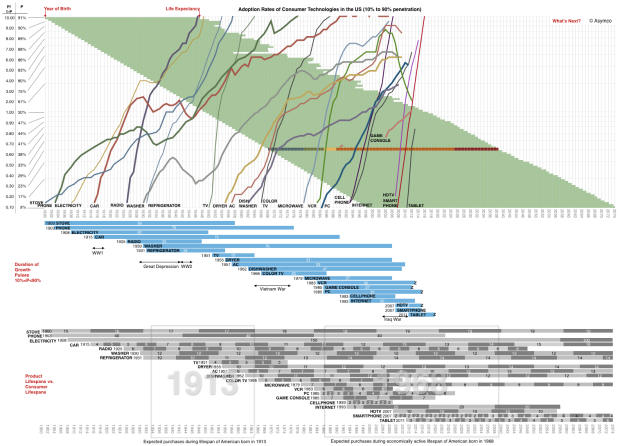 You can use the model above to visualize a lifespan, given a year of birth. Follow the line for your year of birth and measure an expected life (the life expectancy in green is a guide). You can skip over childhood years and decide when you might have reached an age when you start buying and using certain products as well as when you think you might stop.

Trace a rectangle over the grey areas in the bottom graph spanning the years you will start to consume and when you might expect to stop.

The area within the rectangle will include known products and their expected lifespans (marked in alternating shades of grey with a figure for the longevity of service life.) The total number of segments represents your expected consumption.

I marked the areas for a person born in 1913 and one born in 19681 What the analysis shows is that I would be expected to own:

A couple of caveats:

I did the same tally for my grandmother and it matches prettily closely her consumption with the caveats that she did not reside in the US and that she lived almost twice the expected lifespan.

The obvious next step is to multiply the model by population forecasts.