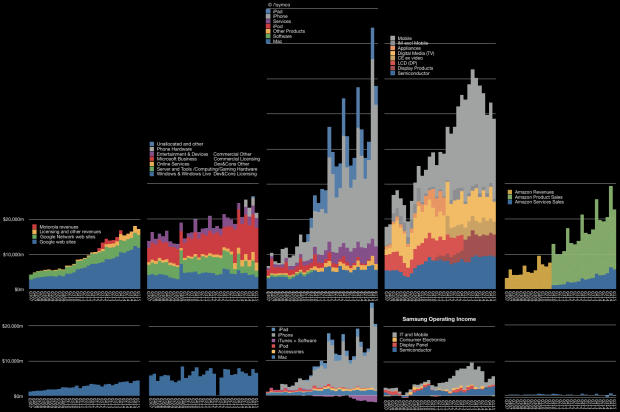 Searching for “iPhone killer” returns millions of hits. It’s hard to remember any phone/product/service/platform/initiative/merger/startup which was not at some point considered an iPhone killer. A sampling is offered here.

In reality, the killers seem to have all faded away while the iPhone continues. We could just shake our heads and move on, but a deeper analysis is possible. Take a look at the graph above. Note that iPhone’s (and hence Apple’s) ascent has not caused decline in its nominal competitors. When seen in the context of the graph above, the success of the iPhone has in fact been complementary to those companies who would be its killers.

Consider that the iPhone drives a large portion of Google’s revenues as it is the home to many Google services and engagement through the iPhone is higher than any other platform, including Google’s own. iPhone users tend to make better customers. In exchange Google pays a great deal for traffic acquisition on iOS devices. The placement of search on Safari is probably the biggest single cost item on Google’s income statement ((Estimates are a few billion dollars a year.))

The iPhone example drew Google to build Android as a facsimile and that, coupled with Brobdingnagian spending on marketing, led to Samsung’s Galaxy success. That success seems to have peaked and the brand is now a victim of low-end disruptors which copied it and the iPhone in turn. However, Samsung electronics benefits from the iPhone in terms of its semiconductor division. Apple is Samsung’s biggest customer and the semiconductor division is now the largest source of operating profits.

The explosion of Android has led to IP licensing revenues for Microsoft and now Microsoft is extending its software applications to iOS, hoping to participate in the iOS ecosystem rather than competing with it. The time may come when Microsoft shows growth from the iPhone.

Finally, although it may seem oblique, Amazon is benefiting from the iPhone. Instead of killing it with the Fire1, the iPhone and iPad offered much more mobile shopping opportunities to the Amazon store. Data shows that iOS leads in shopping traffic and order size precisely at a time when Amazon obtains its largest volumes. Amazon’s AWS also handles a great deal of iOS-originated traffic.

This alternate reality shows that the benefits from the iPhone revolution are broad and deep. It’s not just the direct revenues2 from app sales on the App Store but also the creation of entire new communications modalities (Instagram, Snapchat, WhatsApp) new services (Uber, Airbnb) and the multi-billion dollar accessories markets. These benefits are largely unmeasured and therefore not visible in accounting systems. They are perceivable however.

As the brand flourishes, the perception of vulnerability dissipates and the narrative shifts from Apple getting killed to killing it.