We know how many iPhones Apple ships but we don’t know exactly how many of each model. We can try to come close in such estimates of “mix” by looking also at the market pricing of the phones and the average price Apple obtains1

Combining what we know with some guesses allows some of us to estimate the composition of iPhone models in any given quarter’s sales. Here is a graph showing my estimates:

Having this, we can then assess how each generation of iPhones has performed. Remember that although we had a new iPhone for each of the last eight years, there are only 5 generations in total. Starting with the 3G (second generation) the generations were two yearly product cycles long.

The resulting estimates for generational growth are shown below. 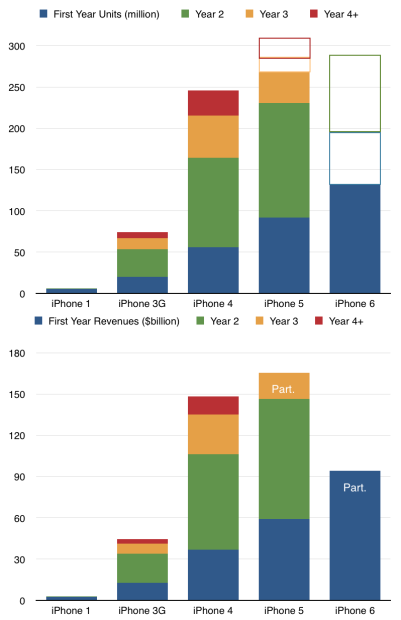 I included a second graph with revenues. Note that the iPhone 5 and iPhone 6 have not run their course. History suggests at least a five year run for any one generation and the 5 is at less than three years old and the 6 is at less than one.

The interesting question is therefore not whether each generation sells more than its predecessor but whether it does so by a substantial multiple. I drew in outline a few estimates on future volumes for the 5 through its end of life and for the 6 for the current and next year. Of course these are highly speculative but the question of how much can be expected from these generational leaps is interesting.

When assessing sales for a new model of the iPhone, Apple used an easy shorthand: “Each new generation sold approximately equal to all previous generations combined.”

Such a pattern of growth, which I call “Schiller’s Law” is extremely difficult to maintain and probably won’t apply in the case of the 5 or 6. However the growth of the overall franchise is very apparent. In particular you can see how first year sales have a very healthy pattern of growth, especially when measured in terms of revenues.