When Spotify and Pandora were starting their streaming services many were quick to point out that Apple was about to be disrupted. The future, they said, was streaming because (young) people could not be bothered with ownership of music and the limitations of a personal collection. Who would want to pay for a few hundred songs when they could listen to millions for free?

At first Apple launched a half-hearted streaming service and then a paid service finally showed up with Apple Music in mid 2015. Since then the company managed to add 15 million subscribers. A tiny number compared to the 900 million iTunes accounts it had reported a year earlier. Pathetic. The number of music subscriptions relative to iCloud accounts, iTunes accounts and active devices is shown the the graph below. 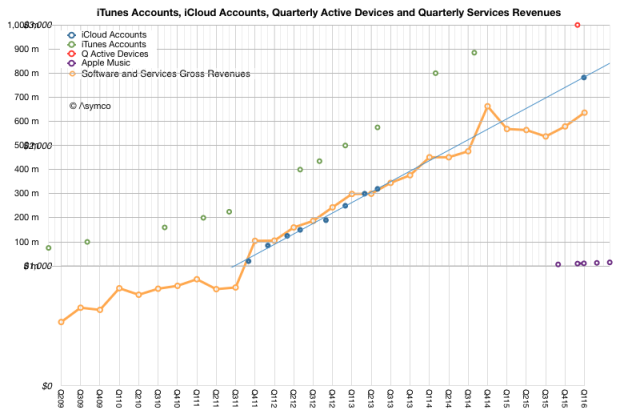 It may be paltry compared to the count of users Apple may have in total, but how does a 15 million user base in 1 year compare with the growth rate for the incumbents Spotify and Pandora?

The following graph shows the ramps for Spotify, Pandora and Apple Music since their moments of market entry. The accumulation of users by Apple looks to be the fastest yet. 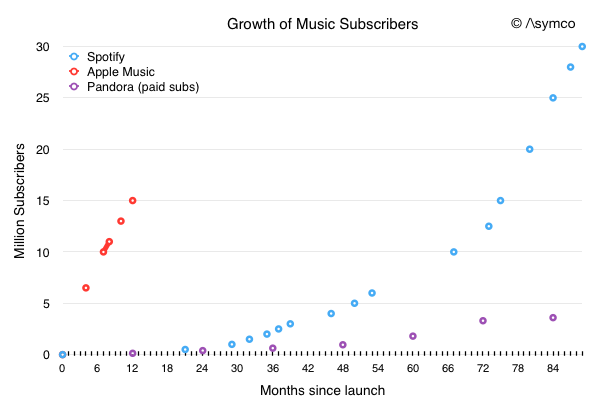 This is, of course, due to a maturing use case. Apple did not have to educate people to the notion of music as a subscription. It could just announce it and users would discover it and just sign up, especially if they were already iCloud subscribers and had a credit card attached to their iTunes account.

But that’s the whole point. Apple did not have to move first in music subscriptions. It did not even have to move second or third. When it did move it could just skim the market and add to its already healthy Services revenue (orange line in the first graph above.) Missing the boat in music in this case meant capturing all the value quickly and with minimal expense.

Fundamentally, Apple’s entry into music subscriptions was a sustaining effort. Streaming sustained Apple rather than disrupting it. The difference may seem merely one of semantics, but it is also the difference between life and death for a challenger. Meaning matters.

This is a cautionary tale for those who would pronounce every new idea as “disruptive” to Apple or anyone else on the basis of novelty alone. The tests for disruptiveness are easy enough and it behooves the analyst to apply them before dropping the d-bomb.