Managing the Mac product line must be one of the most challenging problems at Apple. That may not be obvious given the product’s success. Consider what it has achieved:

The contribution of the Mac to Apple’s revenues is shown in the following graph.

It’s attractive and convenient to contrast the Mac with the rest of the PC industry. A David vs. Goliath tale of redemption. The classic comeback story. But the split between the two old rivals (Windows/MacOS) focuses the mind into a limited view of the computing market. The big change in computing has not been a growing Mac vs. declining PC. It has been a huge surge in mobile device use vs. a decline in PC use overall.

This data is visible in many ways. Browsing data shows mobile overtook PC use this year. Shopping data around Black Friday points in the same direction. Data on user interaction captured by comScore is shown below2 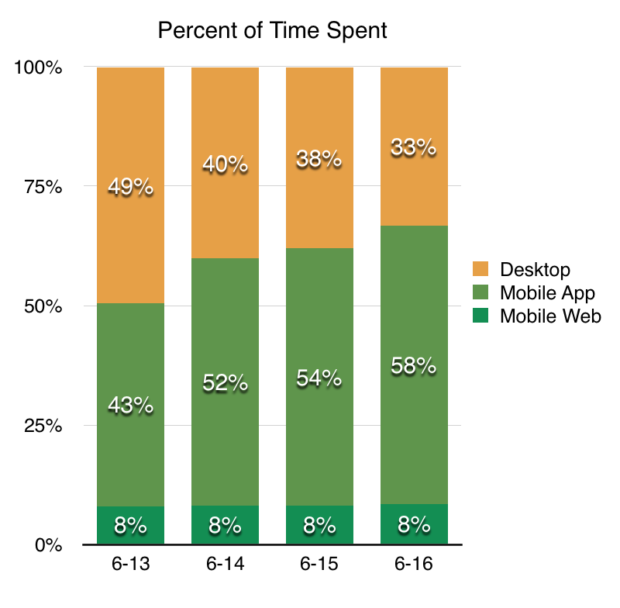 PC use went from half to a third of time while mobile went the other way: from a third to half of time within only four years. All the data is consistent: mobile use has swept PC use aside.

We can see the contrast simply by placing iPhone, Mac and all Windows PC on the same shipment graph. 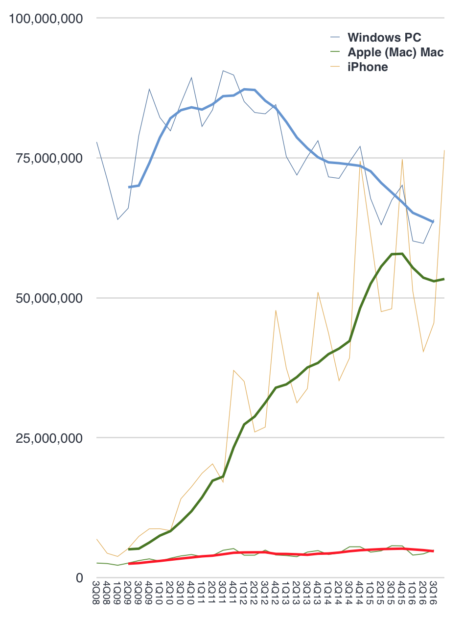 This contrast is spectacular.

I bring this contrast up because I believe it is what focuses the minds at Apple. For them it’s pretty clear where the puck is going. And not just now. Mobile has been foreseeable as a disruption to computing a decade ago–at least to some of us.

And so what do you with the Mac?

To answer this we have to ask what exactly is the purpose of the Mac in the age of the Mobile device?

Note that this is not the same as asking what is the PC in this world. The PC is not having to share a resource pool with an iPad/iPhone. It does not have to answer for its existence to a phone. PC makers and Microsoft are not fighting with an usurper in their midst. They may see the outsider challenger but it’s not an inside challenger. This makes all the difference.

Indeed, because no usurper was allowed to emerge, PC/Windows never moved to a mobile evolution of computing. Microsoft’s platform future was lost because the antibodies which eat disruptions were left unchecked.

But Apple’s immune system was suppressed. It allowed a disruptor to emerge from within. Apple gave birth to its future by suppressing the reaction to that new seemingly parasitic organism. It took an immense willpower to allow this to happen.

But it takes us back to the question of what to do with the incumbent, the donor of DNA and resources. The parent that sacrificed for the child.

The Mac is thus not treated disparagingly. It deserves and gets respect. It is preserved but with limited responsibilities.

Which brings me to the question of what it is allowed to be and hence what it is. It cannot take on the role of being the future. That belongs to the touch screen devices. It will not morph into a touch device any more than a teen’s parent will become cool by putting on skinny jeans. What it will do is become better at what it is hired to do.

The key to the Mac therefore becomes that which the iPad/iPhone isn’t: an indirect input device. The keyboard and mouse/trackpad are what define the Mac. The operating system, the apps, the UX, are all oriented around the indirect input method. The iPhone’s capacitive touch brought about the direct input method, a third pivot in input methods (first was mouse, second trackpad/scroll wheel). Each pivot launched a new set of platforms and the Mac is the legacy of the second.

It’s not obsolete but it is a decreasing share of engagement. Alternate ways of doing the jobs it does well with direct input are emerging on the third pivot but they are not yet good enough. The children are still adolescent and making lots of stupid mistakes. There’s still life in the parents.

The management thus has to focus on how to make the keyboard/trackpad interface better while still saying and believing that the future is touch.

In this context the newest MacBooks Pro are a logical extension of the second wave of computing while avoiding cramming them into the third wave. They are defined by their constraints. Seen thusly, the move from keyboard/trackpad to keyboard/touchbar/trackpad is pure genius.

The touchbar coupled to the other two inputs is a totally new way to interact with computing products. It’s not an “easy” interface as it’s not direct manipulation. It remains indirect, a defining characteristic of the second wave. Indirect inputs are powerful and lend themselves to muscle memory with practice. This is the way professional users become productive. The same way keyboard shortcuts are hard to learn but pay off with productivity, touchbar interactions are fiddly but will pay off with a two-handed interaction model. They are not something you “get” right away. They require practice and persistence for a delayed payoff. But, again, that effort is what professionals are accustomed to investing.

Even so, it may seem that Apple is pulling punches. The product could have evolved into the full-touch, dual screens, pen input, hybrid model of Windows. But that only makes sense if you don’t have a mobile product that is promising the same and tearing up the world at the same time.

You’ve unleashed a disruptive force and now you’re supposed to retrofit the incumbent with the tools to compete. Why not just let the disruptor grow up unhindered.

The Mac is what it is because it’s not alone. It’s part of a family. It is a parent. It strives to be better but will not take the future from its child.