The answer, regardless of when you ask, is: The same as the current iPhone.

Of course, this is the answer to the question of what will the average new iPhone cost. The average selling price (which combines the revenues and the volumes of all units sold and is reported every quarter) has not varied very much since early 2008. To the degree that there is variance (between $600 and $700) it is due mostly to seasonality and reflects a mix of more expensive units during the launch quarters and a cheaper units during later periods when the product is older and due for an update.

The graph below shows the average selling price as a dashed line and the corresponding prices of individual product variants available for sale in the US during the same time frame.1 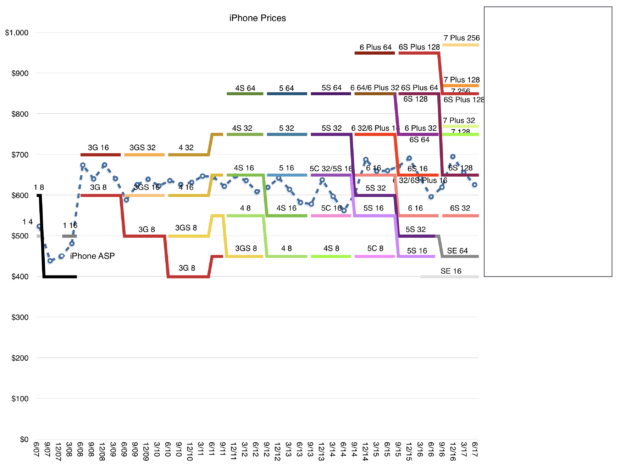 The graph shows a high degree of consistency of pattern: Every year a new iPhone is launched which replaces the one launched the year before. The older product is still offered at a reduced price. Price brackets are very firm and set at fixed intervals about $100 apart.

A few minor changes in pattern over the years can be observed:

The overall pattern looks like a staircase with a widening price range where the lowest price remains constant and the upper price rises every three years by $100.

This year’s ceiling is due for the fourth leg up and if the pattern persists, we should expect it to reach $1100.

This iPhone staircase has been built over 10 years and I don’t see it changing over the next three. I therefore drew the blank box over what I thought would be the price range from now until late 2020.

As the product matures the user base grows (to nearly 1 billion today). Later buyers will opt for the lower price points, but the availability of higher, more aspirational models (sustained by the brand) means that a minority will gravitate upward, mainly because they can. This ensures that although the median and mode of the price trend downward, the average price stays the same. 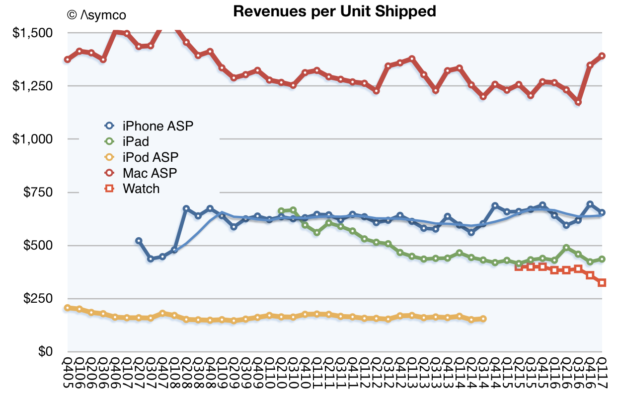 The technique of preservation of average price seems to be in effect across Apple. In other words, the evidence suggests that Apple prefers to keep average pricing for all products constant. Individual variants are priced so that, as the category matures, the changing mix leads to consistency in price ownership.

The signaling is not just to buyers but also to competitors. Ownership of price forces competitors to occupy adjacent brackets. This process begins at launch: the new Apple product is introduced in what is perceived as a premium stratum2 thus the reaction from competitors is to “undercut” it. But, as Apple climbs the price staircase, preserving the floor, it keeps competitors bunched up at the bottom. Competing in the same brackets with Apple is futile as other brands can’t sustain the perceived premium position.

Apple is thus quite easily understood as a remarkably consistent consumer products business. The only surprise that remains is how long it takes for that understanding to propagate.