The last time Apple reported iPod unit and revenues was for the third quarter of 2014. Thereafter the product segment called “Other Products” was used to include what was formerly the iPod segment and the “Accessories” segment. Exactly two quarters later Apple began to sell the Apple Watch. Apple Watch was not broken out as a separate product segment and remained a part of Other Products along with iPod touch, Beats, Apple TV, and Apple-branded and third-party accessories. Soon the HomePod will also join the Other products.

The combined iPod, Accessories and “Other” product sales are shown in the following graph.1

Note that an attempt is made to estimate the contribution of Apple Watch to the mix. The method is simple: if you can estimate the non-Watch sales trajectory then the Watch is the difference between Other total and this trajectory.

If we discount the iPod, the non-Watch revenues come down to Apple TV and Beats, mainly.  Note that the data shows the contribution of Beats (Q4 2010) but it’s hard to parse specifically the growth of Beats. Since the Watch launched we also saw the introduction of AirPods and new Apple TVs, both of which probably contributed to some growth to “Other excluding Watch.”

We can take a stab at the first 6 quarters of Watch by projecting Other with some nominal growth. Thereafter Watch can be modeled using growth assumptions. Apple stated that growth was above 50% during the past three quarters. There are a few quarters where we must make guesses but overall the picture that emerges, shown below, is fairly robust. Note that I’ve included estimates for the fourth quarter of 2017 assuming continuing 50% growth. This is driven primarily by the launch of the LTE-enabled Series 3.

The result is a cumulative sales value of $14.3 billion and a volume of 40 million units (based on average pricing assumptions). 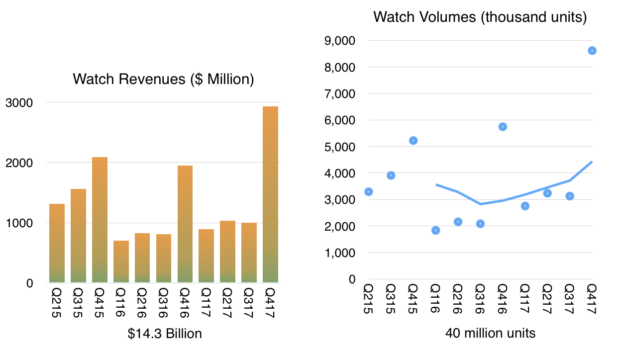 But what most catches the eye is the transition from iPod to Watch. Watch entered nearly at the same time as iPod bowed out. Its contribution to sales seems to mirror the iPod as well. The interesting question then becomes if the Watch will eventually match and indeed exceed the revenues from iPod.

I’d say the better question is _when_ Watch will overtake iPod. From a revenue point of view, I believe next year’s fourth quarter will see the Watch generating higher revenues than the highest quarter for the iPod.2

It’s not easy to predict growth but my bet remains that Watch will get there eventually becoming the third most popular Apple product. Perhaps even second.

Overtaking the iPod is quite an achievement considering that the iPod was once synonymous with Apple itself. Although Watch may overcome iPod, Apple may never be known as the Watch company. That’s perhaps for the best. I’ve noted before that Apple was once seen as the Apple II company, became the Mac company then the iPod company. Now of course it is thought of as the iPhone company though it’s no more that than it ever was any of the other things.