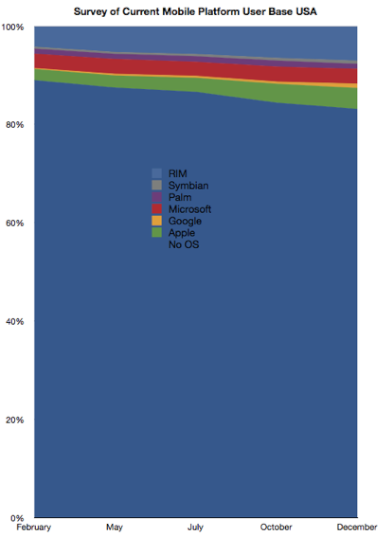 Comscore revealed their latest survey resultsfor the US mobile subscriber market. From the latest data and the data previously released in October we can put together a few insights.

The number of smartphone users increased by 3.2 million, growing at over 1 million new users per month.

Non-smartphones lost 2.1 million users and 1 million subscribers were added to the top line.

The non-smartphones lost 1% share in the quarter and 6% since February. Smartphones make up 17% of all users.

Google has overtaken Symbian to rise from last place in the platform installed base and is closing on Palm.

At 5% share erosion per year, the non-smartphone market will completely disappear in about 14 years, though I feel 10 years is a more likely target with 5 years until the market is 50% penetrated.