[Wedge Partners analyst Brian Blair] also contends that Apple’s production forecasts suggest the company thinks it can sell 100 million iPhones next year. “While a staggering number any way you look at it, our checks reflect full calendar 2010 builds in the 48-50 million unit range,” he writes. “While this number can change and adjust downward or upward  based on demand, we believe it is incredibly bullish that Apple feels it is possible that they could see nearly 100% year over year growth for iPhone in 2011 as this would mean that exiting 2011, Apple would have approximately 10% share in the global handset market.”

The 100 million in 2011 estimate assumes 100% growth on average. Is it really “staggering” to forecast another year of triple digit growth?

The history of growth is one indicator. There the news is good: the product has been able to sustain that level of growth for three years.

The second indicator is room to grow. Apple largest competitor is smartphone non-consumption. This competitor holds 76% share, but is rapidly losing share. Consider the the following chart: 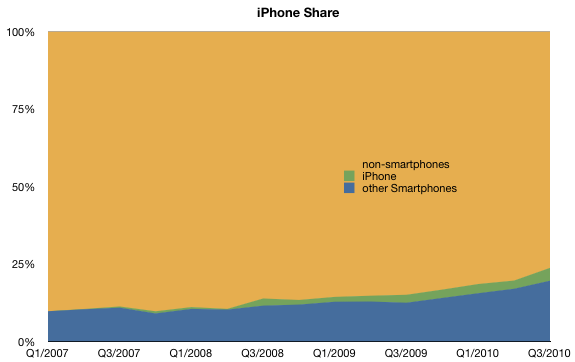 I’ve heard the mantra that smartphones are not for everybody and that the vast bulk of consumers will opt for voice-oriented phones indefinitely, especially in low-GPD/capita countries.

To this I point out that there are no technical obstacles to implementing smartphone technology in all price points nor that there are any constraints on distribution, network technology rollouts or shortage of capacity to produce these products for all current mobile users (5 billion at last count). I also believe that user demand for this level of product utility will shift rather more quickly than supply.

So, in my mind, the headroom looks pretty good as well.

Lastly there is the question of alternative platforms. I’ll get to that shortly.