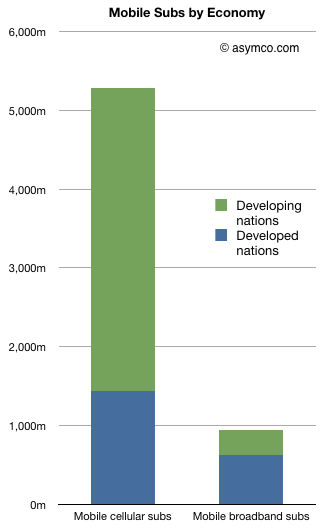 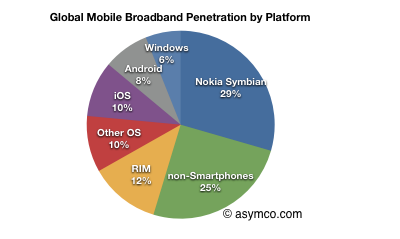 Which leads back to the question of platform potential. Platforms that target developing nations have the challenge of low broadband availability in the near term in addition to the challenge of device pricing. There are still 800 million developed country subscribers who have yet to upgrade to mobile broadband.

At the time these statistics and knowing the platform sales histories, my estimate is that only 18% of mobile broadband subscribers were using either iOS or Android. 25% were not even using a smartphone and 29% were using Symbian. (See pie chart).

But existing smartphone users are not the most attractive market to target with a new platform device.

A new smartphone user could come from the following groups of users:

To assess the timing, one could assign some probability weights to these categories to create various scenarios for adoption. My own guess is that the next 500 million smartphone users are easily within reach in the next two years without a significant amount of inter-platform rivalry (See stacked bar chart to the left).

Only after two years will existing smartphone users become attractive for poaching and even that assumes that developing nation networks will still be largely unaddressable.