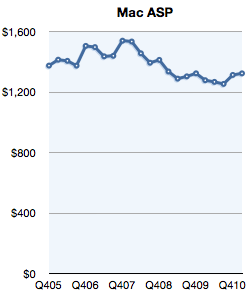 The Mac grew at 28% while the overall PC market contracted at 3%. The Mac has outperformed the PC market overall for 20 consecutive quarters.

I’ve mentioned the increasing shift of Mac mix to portables as a possible reason for the growth of the business. The Mac was one of the first to move to a portable form factor and has been pushing portability over performance for many years.

The following chart shows the relationship between growth and portable mix: 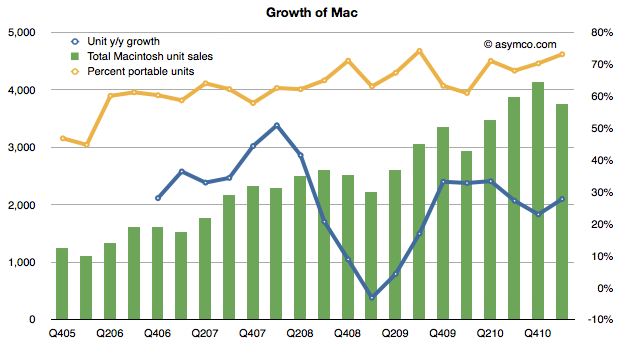 The trouble is that mix is not enough to explain the increasing gap with the rest of the PC industry. Windows PCs have also embraced portability and have even run down the path of over-serving portability with the netbook.

Clearly something else must also be at work. This was even noted by Apple’s COO Tim Cook in the last conference call in response to question on the effect of iPhone growth on the Mac:

[iPhone] clearly seems to be creating a halo effect for the Mac. And I think that’s one reason we see the growth that we are seeing on the Mac. It’s amazing when you see the 28% year-over-year versus the worldwide market in PCs contracting by 3 points. It’s an astonishing delta.

The delta has been there for a while but it’s widening and it’s persistent.

I’ve never been comfortable with the halo effect. Not because it’s not happening but because we don’t have a way to measure it. I’ve never seen reliable data that establishes a causal link. Lots of anecdote but little proof.

The other problem with halo is that it implies illusion and hence impermanence. The halo effect is a cognitive bias which can mislead. An example would be judging a good-looking person as more intelligent.

This effect is often exploited in marketing. It’s quite common in the automotive industry where halo vehicles (e.g. Ford GT 40 or Dodge Viper) are created which promote sales for the entire brand even though they may lose money. These efforts often fail or have temporary benefits at best.

When it’s deliberate and an attempt to prop up something unworthy it seems deceptive, dangerous and temporary (buyers may be disappointed when they buy a Ford or Dodge and realize that they are not supercars and a reverse halo effect can emerge.)

A halo effect should be used to boost a product that is under-rated not badly rated. This is when the effect creates benefit over a long period of time like the five years over which the Mac has over-performed.