The number of BlackBerry phones sold fell 41% year-on-year in the last RIM fiscal quarter. Sequentially the fall was 30%. Though surprisingly poor, I note that Nokia’s smartphone business fell even more dramatically last quarter (down 50% y/y and 39% sequentially). LG also saw a 44% decline in unit shipments in Q1.

The history of smartphone shipments for the largest vendors is shown in the following chart: 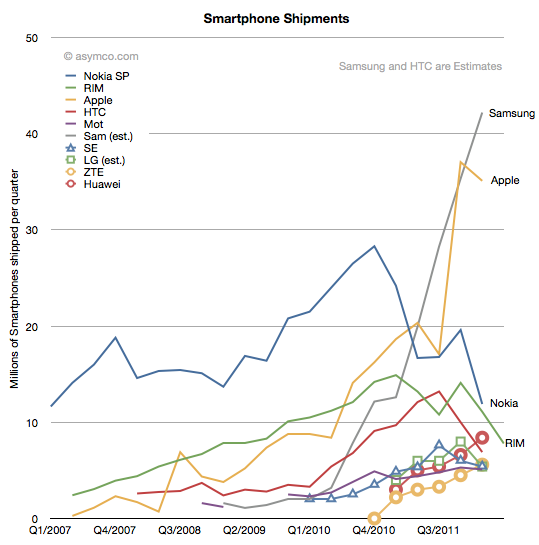 From forecasts made by Huawei it’s probable that they overtook RIM in the last quarter, dropping RIM to 5th or 6th ranked vendor in smartphone units.

RIM’s 7.8 million units is the same level of sales as it had in early 2009. The total market was only about 250 million units per quarter then. It’s around 400 million today. A quick calculation shows that RIM’s smartphone market share has fallen from a peak of 22% to about 6%.

Hardware revenues were $1.652 billion. Matt Richman calculates the average hardware revenues for the BlackBerry of $203. I include service revenues in my ASP calculations (for Nokia and Apple these are also significant values) yielding $309 per BlackBerry. The history of total revenues, revenues per phone and operating margins are shown below relative to competitors. 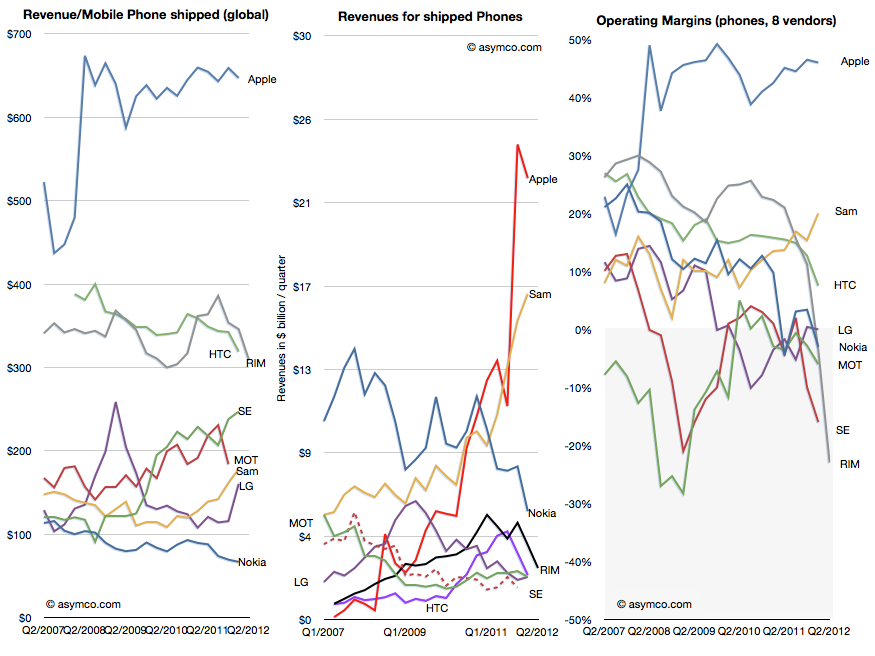 Operating margin tells the most sobering story. As I’ve often repeated, historically no company has survived dipping into the grey zone.

To reiterate, the logic of irrevocability in this industry is as follows:

Success depends on three conditions being met by the vendor’s products:

If all these factors are present, the vendor enjoys a virtuous cycle of growth. If any of these is lost, the others are also likely to be lost as well creating a vicious cycle of decline.

Loss of operating margin is an early indicator that at least one condition is not met. Usually, a failure of consumer trust leads to a drop in purchases which leads operators and distributors and retailers to flee and then developers defect.

It’s been impossible to recover from this tailspin so far. There is a procedure which works in theory: accelerate downward by investing in a new platform. The move is counter-intuitive but essential in re-building trust, quality and relationships.

However, the reason it does not work in practice is that this struggle is not with gravity alone. While spinning downward, the company is also subject to competitive attack. Competitors fill the void and take customers into locked-in ecosystems. There is neither the time nor the ability to defend.

Cash runs out and customers are divided up between the survivors. Nokia and RIM face this scenario today.