The most interesting juxtaposition in market data happened this week.

I will state these data points with a different emphasis:  while Apple explicitly reported, both in a press release and in an SEC filing, Sales of 9 million units, BlackBerry reported recognition of revenues on 3.7 million units.  At the same time BlackBerry also reported sales to end users of 5.9 million units.

So, did Apple sell 9 million iPhones in three days? What about units ordered and not delivered? Which of these units will show up in the company’s income statement? Conversely, did BlackBerry sell 3.7 million or did it sell 5.9 million smartphones in three months?

The answer is dependent on what constitutes a sale. I suggest re-reading the Sold and Shipped: A Brief Introduction post from last year. Understanding is complicated by many factors, not least of which could be intentional signaling by management. We may never come to a perfectly matched comparison of the two companies’ situations but our job as analysts is to see through the signals and obfuscating language and interpret a pattern. A pattern that extends over a time and helps us learn.

My observation is one of contrast. The juxtaposition this time is that Apple emphasized sold and not shipped while BlackBerry sold more units to end users than it recognized revenue. These signals reflect precisely the inverted fortunes of the two companies.

For BlackBerry the higher sold than shipped recognition was due to a product launch failure. Units which were shipped (and recognized as revenue) last quarter did not sell and the company is not only writing off the inventory but has drastically reduced its deliveries of new units in order to drain inventory. The company explains:

The company is essentially saying that due to the unusual circumstances of a product launch failure, they will change how they account for their business. They don’t have the confidence that units shipped will actually sell and will not recognize them since they fear they will have to write some off. They are signaling: They are being far more conservative, not reporting shipments alone because those shipments could essentially be value free. 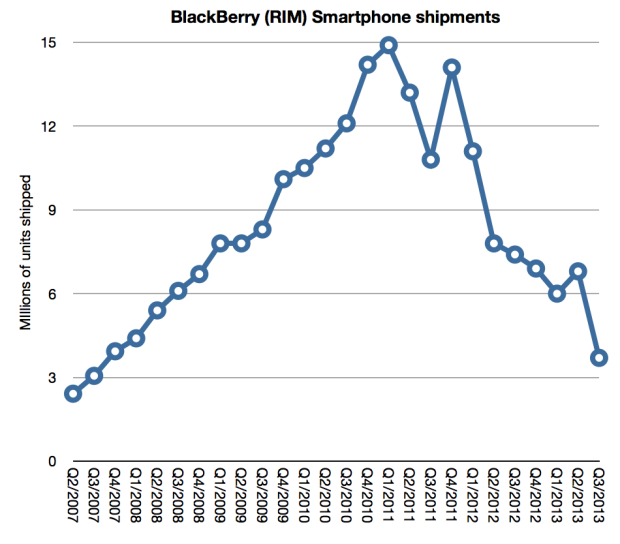 You can see the instability in volume recognition in the graph as a clue. Product launches cause erratic changes in what was previously a seasonally stable business. This is, essentially, the company being thrown onto its back foot. It is staggering from an unexpected blow and resetting expectations.

Now note the contrast with Apple. Apple provides every quarter shipment data on all its products. This is consistent with generally accepted accounting principles and consistent with reporting from other companies.1

Apple also offers “channel inventory” data on select products. This inventory data, when coupled with shipment data, offers insight into how many units are actually purchased by end users. If Apple runs a tight ship then its inventory is relatively low but if it has a reliable customer base that of its channel is also low. Moreover, if it can predict sales well then it avoids overfilling the channel and having to take a hit while draining it.

In that context the way the company reported the 5c/s launch is signaling optimism:

On September 23, 2013, Apple Inc. […] announced that it has sold over nine million new iPhone 5s and iPhone 5c models, just three days after the launch of the new iPhones on September 20.

The SEC filing language above refers to the following press release:

Apple® today announced it has sold a record-breaking nine million new iPhone® 5s and iPhone 5c models, just three days after the launch of the new iPhones on September 20

“This is our best iPhone launch yet―more than nine million new iPhones sold―a new record for first weekend sales,” said Tim Cook, Apple’s CEO. “The demand for the new iPhones has been incredible, and while we’ve sold out of our initial supply of iPhone 5s, stores continue to receive new iPhone shipments regularly. We appreciate everyone’s patience and are working hard to build enough new iPhones for everyone.”

The reporting of sales after a launch weekend has been a staple of Apple’s communications about product for a long time. Therefore the evaluation of this performance should be made in comparison with previous launches.

But it’s not necessarily a statement of end user purchases. Nor is it a statement purely of shipments. The term “sold” as used in a press release is not an accounting term and it is not something which is meant to be audited.

However, none of that matters. The signal is what should be observed. By deliberately and repeatedly using the word “sold” Apple is expressing confidence that demand for its products is strong. Sure, there is channel inventory in that 9 million unit number but there are also ordered devices which have not been shipped and thus are not counted as sales. There are also depleted store shelves and people angry about not getting their desired phone model. Apple knows this, Tim Cook is making it clear they know this. They have excellent visibility into the distribution of their products. They have excellent inventory management. They are typically conservative in their financial reporting.

When interpretation of a signal is very different from the literal statement, it says more about the interpreter than about the company.