comScore reported that 15.4 million iPhones were in use in the US as of November. (25% share of 61.5 million total smartphones.)

We also know that about 75 million iPhones were sold by November since the product launched. With about 17 million units older than two years, and assuming that half of those might still be in use and that all the iPhones less than 2 years old are still in use, we get an upper bound of 66.5 million iPhones in use globally.

That means 23% of all iPhones are in use in the US and that 77% are in use outside the US.

Can this be verified? END_OF_DOCUMENT_TOKEN_TO_BE_REPLACED

The release of the iPhone is rightly acclaimed as a watershed event in the history of telecom. It was a sensation. But it was also a product that was widely underestimated and dismissed. Even today expert opinion is divided. The critics of the product transitioned directly from labeling it a superfluous bauble to an obvious and copyable sustaining innovation. Advocates of the product describe it as revolutionary and dazzling with the potential for capturing significant profit share due to premium pricing and positioning.

So which is it? END_OF_DOCUMENT_TOKEN_TO_BE_REPLACED

Morgan Stanley’s Web 2.0 update came out yesterday and it’s full of nice charts. Here is one:

Note that the expectation for smartphones to overtake all PCs (including netbooks) will happen when smartphones sell more than 450 million units per year.

In 2013 nearly 650 million smartphones are forecast to be shipped.

My estimate for the iPhone in that year is 180 million. That would give iPhone (excluding iPad and iPod) about 28% share. The last quarterly figure is around 17%.

Perhaps 180 million iPhones per year will be defined as failure by those who consider over 80% share as a threshold for success but I still think it will be a healthy business.

Even assuming a cut in ASP to about $350, Apple will still be able to get about $62 billion in sales from phones (a bigger number than 2009 total sales for the whole company).

I would also add that by the end of 2013 Apple will have sold about 470 million iPhones. Though many will be out of use by then, the installed base will not be small (I’d guess about 300 million). Including all iOS devices, 500 million is a credible estimated audience for developers.

It’s entirely possible that Android variants, offshoots and forks will add up to a bigger number by then, but to pre-emptively declare the platform “war” won because the also-ran Apple will only have half a billion users seems disingenuous.

I am dead serious. I am now convinced that we have enough data to determine for a fact that Apple will not only see a dramatic decline in quarter-on-quarter sales in units of the iPhone this January-March quarter (which is the predictable pattern and no surprise) but that we will also see a decline in iPhone market share against at least HTC and Blackberry;  that would be demoralizing news in itself. I know now that the numbers are clearly stacking up so, that the annual sales level of iPhone units, will result in a decline in iPhone annual market share in 2010.

via Communities Dominate Brands: iPhone in Memoriam: A History from its Peak Moment of Success. But who copied whom?.

Contrary to the loud and emphatic proclamations above, the data shows that the iPhone’s market share gains have been steady.

Muller spots the culprit in the margin drop. He notes that this is money set aside and may have been in anticipation of returns of the iPhone 4 due to antennagate. Note how in 3Q cost of claims was 155 and accruals were 157, about a 1:1 ratio whereas in 4Q costs were 286 and accruals were 457 about 1:1.6.

It’s possible that if the costs this quarter do not materialize then we could see a margin upside surprise.

(Contrast this insight with today’s large scale sell-off in shares due to mass media repetition of earnings guidance from the conference call as shocking “news.” See also evidence of unlawful trading behavior here.)

The iPad was announced to a loud chorus of disapproval and disdain. It’s easy to forget the overwhelming scorn and insult poured on the product for months before and after sales start. Analyst forecasts were comical. At this time it looks like all 12 month iPad unit forecasts will have missed by more than 100% (mine included).

As data on iPad performance was published for the first quarter’s sales, the mood swung from ridicule to ridiculous. END_OF_DOCUMENT_TOKEN_TO_BE_REPLACED

I don’t write product reviews and I don’t pass judgement on individual products but I do own and test various products. For example I have the Android powered Samsung Galaxy 5 (GT-I5500) and the experience is, in my opinion, better than for recent Symbian phones but not as smooth as for Apple’s products.

But that’s not what this article is about.

The key bit: “At the critical juncture […], when they should have gone for market share, they went for profits.” I think this encapsulates Jobs’s philosophy since taking over Apple in 1997. Take the high end of the market first, establish a brand and presence, then steadily start to expand.

I’ve long argued that Apple is in the phone business to win significant share (i.e. greater than the share they have had in the PC business).  Since the phone market is vast (1.2 billion phones sold in the last four quarters) iPhone volumes must be as well.

So how has share evolved, and what can we expect? This is a graph of quarterly share for iPhone including a four period moving average: 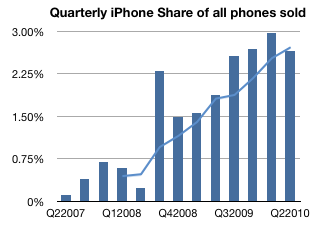 The trend is clear to see.  With seasonal variation due to the launch cycle, the share is likely to increase over 3% and keep going. How far can it go? That’s a strategic decision for Apple’s management. If we are to take Steve Jobs’ word that their plan is not to be a niche player in any market they target then I have to conclude that Apple is aiming above 10%.

The volume expansion in the US due to the end exclusivity is only the latest in a series of distribution deals that Apple has brought to bear: International expansion, dropping exclusivity in other countries and broadening the portfolio (including earlier models in current line-up) are all natural and obvious moves in a broader market push.

Pricing might be considered another lever that Apple could use, though that seems unnecessary today.

I conclude that growth in iPhone sales of 50% per year seems entirely possible for the next few years. Such growth would allow Apple to reach 10% of the world’s 3G subscribers by 2013. That would still be only 4% of all phones and 20% of smartphones.

Calling the iPhone this quarter was going to be a challenge. This was a transition quarter where an old lead model would be replaced with a new one. The launch of the iPhone 4 was going to affect the volumes, but nobody could predict how. We’ve had a few such quarters and they were volatile. The number of sales days varied and the distribution of the old product was much different. The problem was compounded by the leak of the prototype and the uncertainties of launch day logistics. My forecast had been 8.5 million units.

In the event, 8,398,000 iPhones were sold. This included 1.7 million iPhone 4s which means about 6.7 million 3GS phones sold. That’s quite remarkable given the end-of-cycle timing.  8.7 million 3GS were sold in Q2 which means the sell-in was down only about 2 million for the transition.

The even more remarkable story is the average selling price. It came in at $635.15. The iPhone has ranged from $437 to $674 ASP over the last three years (see chart). This figure places it near the top of the range, a great performance for the end of a product cycle quarter. 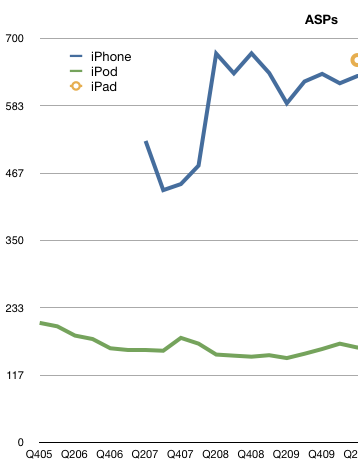 I estimate gross margin at 56%, a drop from the more typical 60% due to iPhone 4 launch. With revenues of $5.33 billion and cost of sales of $2.2 billion, Apple created operating profit of $3.13 billion–we’ll take a look at that number relative to other vendors later.

Growth year-on-year were 74% for revenues and 61% on units. For a transition quarter, these numbers are spectacular. For comparison, during 2009’s transition quarter (Q4) revenues grew at 5% and units 7%. Furthermore, according to Apple’s management, iPhone unit sales in the June quarter were running 90% above the year-ago period prior to the company draining thechannel ahead of the iPhone 4’s release. In the December and March quarters, unit sales were 100% or more above prior-year results. This means that 100% growth is sustainable though going forward I’m keeping forecast at 65% growth.

Seventy percent revenue growth cannot be seen as anything other than a sign of rude health.